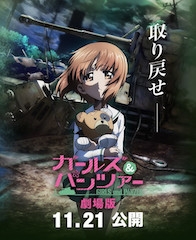 After initially being released in November 2015, the Japanese animation film Girls und Panzer: The Film sky-rocketed from 24th to 8th in the national box office rankings this month when it was released in 4DX. The average occupancy rate during the films first weekend in 4DX hit 97 percent at the 27 4DX screens it was available. The film is set to be screened at all 33 4DX screens in Japan this March.

Girls und Panzer: The Film is a Japanese animated film directed by Tsutomu Mizushima. The story follows a group of high school girls who are practicing tank warfare as a sport. The film is a sequel to the anime television series, Girls und Panzer.

From the first day of 4DX pre-ticketing, fans rushed to theatre websites and the movie generated unprecedented web traffic. As the demand exceeds expectations, people are sharing information on Twitter about the status of available seats in each 4DX location.

Japan is the fastest growing market for 4DX currently with 33 auditoriums nationwide. The number of 4DX seats in operation in Japan increased almost 4 times this past year, going from 920 seats in 2014 to 3,568 in 2015.