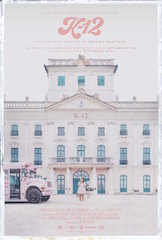 Melanie Martinez and Atlantic Records new album and accompanying full-length film, K-12 will be released September 6. Prior to that, the film will have its official Los Angeles film premiere on September 3 exclusively at Hollywood’s famed Arclight Cinerama Dome. An official New York City premiere will follow on September 5 at the AMC Empire 25 in Times Square.

That same night will see K-12 shown as a one-night-only global event in theatres around the world. Presented by theatrical distributor Abramorama, K-12 will play in more than 60 theatres in the U.S. and many more internationally in the United Kingdom, Australia, Canada, Spain, Mexico, Brazil, New Zealand, Ireland, and Argentina.

Shot last fall on location in Budapest, Hungary, K-12 sees Martinez starring as Cry Baby, a strong and sensitive girl who is sent off to a disturbing sleep-away school hidden underneath a grandiose façade.

"My heart is incredibly full,” says Martinez, “To be able to show people what I’ve been working on these past few years, and to be given the opportunity to create a feature film and have full creative control over every aspect of this project is a huge blessing and I’m beyond grateful."