Abramorama Releases Made in Venice 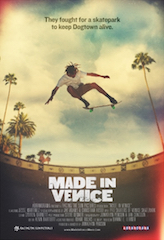 Independent distributor Abramorama has announced the theatrical release of Made In Venice, a documentary about the inside story of the street-wise skateboarders of Venice, California, and their endless struggle to make the dream of a skate park come true.

Made In Venice captures the firsthand stories and recollections of 40-plus years of skateboarding in Venice that started with the Z-Boys, and continued with its legendary street skaters and the iconic Venice Skatepark. Never-before-seen Super-8 and early video footage, along with rare black and white stills, take audiences back to innovative demos on the Boardwalk and skating the walls of the Pavilion, as the Venice skaters pushed the boundaries of street skating and put it on the global map.

Abramorama’s Evan Saxon said, “We’re ecstatic to bring Made In Venice to theaters.  It’s a fantastic story about the hard work, passion and persistence the local skateboarders of Venice put forth to achieve their goal – a skate park for the younger generation in the city where it all began, Venice, California.”

Director of Made In Venice, Jonathan Penson, was captivated by Venice and its skateboarding culture. “Made In Venice is a fun and inspiring film that gives you an insider look at the birth of the skate park in Venice. It is a great example of what a community can do to effect positive change when they all work together.”

Made In Venice is showing noq at the Laemmle Monica in Santa Monica, California. Following its Los Angeles openings, the film will roll out in theaters across the country, including skateboarding hotspots such as Seattle, Portland, San Clemente, Salt Lake City, Denver, New York City and more.