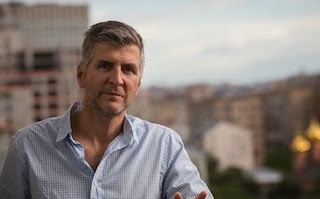 Accomplice Media has signed director Stephen Pearson for exclusive representation in the United States. A one-time advertising agency creative, Pearson has built a strong portfolio as a commercial director, primarily consisting of performance- and character-driven comedy.

“We are really excited to be working with Stephen,” says Accomplice Media executive producer Mel Gragido. “We’re big fans of his comedic stylings and are impressed with his talent for working with actors. We feel confident that we can create new opportunities for him in the rapidly changing landscape of our business.”

“We couldn’t be happier to join forces with Stephen,” adds executive producer Jeff Snyder.  “He is very talented and able to bring out the best in projects through his vision and the relationships he builds with creatives and clients.”

For his part, Pearson says he welcomes Accomplice’s enthusiasm. “Joining Accomplice is a good move for me,” he observes. “Mel and Jeff have a very good sense of the advertising market today, and where the opportunities are for the work that I do. I like their aggressiveness and the commitment they make to their directors. They’re producing very fresh work and I’m excited to add to it.”

Most recently with @Radical Media, Pearson traces his interest in comedy advertising to his early days as an agency creative. He worked variously as a creative director, art director and writer for Merkley & Partners, Goodby Silverstein and Partners, Mad Dogs and Englishmen and Dweck & Campbell.

He moved behind the camera via Hungry Man and quickly established himself as a brilliant comic storyteller. Using improvisation and an inspired touch for casting, he produced work that stands out because people believe what’s happening in front of the camera. His short film for JC Penny, Return to the Doghouse, picked up a number of awards including a Lion at Cannes.

His risky spots for the Republican National Convention received a Silver Pencil at the One Show and his spot for Bizarre Foods received an Emmy nomination. He is also the recipient of awards from One Show, D&AD, AICP, New York Art Director’s Club, Communication Arts, ADDY and Clio.

“I focus on bringing out the truth of the situation,” Pearson says. “There is a perfect word: verisimilitude. All great art, writing, films, stand-up acts and even cartoons have this. Verisimilitude exists in great advertising too. When given the opportunity, I try my hardest to make sure the truth comes through.”