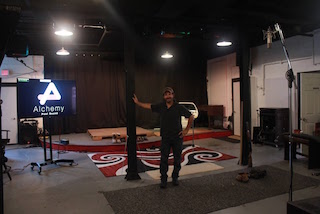 Alchemy Post Sound has added a second Foley stage to its facility in New York. The new space is designed to complement the company’s original Foley stage with a live sound environment meant to enhance the production of interior effects that can benefit from natural ambiance. The new stage will also enable Alchemy to boost production, allowing two Foley teams to work simultaneously.

“We needed to expand and to have more flexibility with the sounds that we creat,” said Foley artist and company co-founder Leslie Bloome. “This also allows us to keep two teams working during normal business hours.” Recent credits for the company including the upcoming features; Don’t Worry, He Won’t Get Far on Foot; Radium Girls; and Good Time as well as the television series Berlin Station, The Sinner, Master of None and Gypsy.

The new 1300-square-foot Foley stage has a natural reverberation of 500 milliseconds of reverb delay. That stands in contrast to the studio’s original Foley stage, which has a traditional dry sound. The reverb makes the new space ideal for recording interior sound effects. A theatrical curtain was installed to partition the space when then ambience needs to be less.

“The bounce in the room creates a beautiful ambience and the existing floor allows us to recreate the sound of concrete, linoleum and tiles,” said Bloome. “It’s virtually impossible to recreate that ambience artificially.” He adds that adjoining kitchen and bathroom spaces are also utilized for recording Foley in natural environments.

The new Foley stage was used extensively to produce Foley effects He Won’t Get Far on Foot¸ a feature based on the life of quadriplegic cartoonist John Callahan. “The props in the film are very specific – a wheelchair, drawing tools, et cetera – and it was imperative that we get them right,” notes Foley editor Ryan Collison.

The stage’s control room is fitted with a C24 console running Avid Pro Tools HD. Other key elements include Neumann U87 and KMR 81 microphones into Millennia microphone preamps and an Apogee Symphony converter.

In addition to working on the stages, Alchemy’s crews often record Foley on location. The company has regular access to a 70-year-old private residence, which it uses to record creaky floors, staircases and other sounds. “We record Foley in three, very different environments and that makes us unique,” said COO and studio manager Andrea Bloome. “It gives us a lot of flexibility to deliver the types of creative sounds that filmmakers want.”