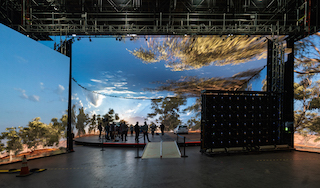 Amazon Studios has officially opened Stage 15, its new virtual production stage, and the formation of the new Amazon Studios Virtual Production department.  The stage combines two former stages to accommodate an LED wall that is 80 feet in diameter and 26 feet tall. The first feature film to shoot on the new Stage 15 will be the family holiday comedy Candy Cane Lane, directed by Reggie Hudlin and starring Eddie Murphy.

The ASVP department will shepherd each project on Stage 15, transferring institutional knowledge along with an optimized workflow developed in partnership with—and powered by—Amazon Web Services. The division has a full-time executive, engineering, and creative team of 20 that has been operating in stealth mode since 2020 on the design, pipeline, and build-out of Stage 15. Working with the volume wall, production creatives can interact with digital assets and processes in a manner that mirrors live-action to enable digital world capture, visualization, performance capture, simul-cam, and in-camera visual effects. 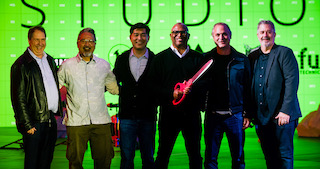 Stage 15 is fully connected into the AWS cloud and is an integrated part of the production-in-the-cloud ecosystem. The facility provides a camera-to-cloud workflow, with direct connection from Stage 15 to AWS S3 storage to make dailies instantly available to creative teams from any location. Every shot taken on Stage 15 ends up in the AWS cloud in real time, with the ability to safely and securely distribute assets around the globe.

The ASVP team is also developing a VFX and virtual production asset management system that lives on the AWS cloud, allowing production teams to catalogue, search, preview and repurpose production assets. This powerful backend system will reduce the lag time that productions typically experience when transferring files and assets from set to editorial, VFX, and post-production vendors and facilities.

“With the combination of AWS and Amazon Studios innovation is inevitable,” said Chris del Conte, global head of VFX, Amazon Studios. “When you mix the worlds of entertainment and technology, it allows us to take everything to the next level.” 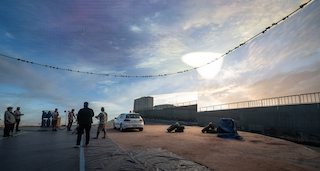 “The ASVP team are terrific collaborators, and I am delighted to utilize this new technology for Candy Cane Lane,” said Hudlin. “Advances in production and our industry continue to astound me and the volume wall is an impressive innovation for our business. For a production like this, with such a large scope, it’s an invaluable storytelling tool.”

Stage 15 is a 34,000-square-foot structure including the LED volume, a Sandbox lab, and 17,000 square feet of space dedicated to set construction and production support.

Amazon filmmakers may access ASVP as a consultation resource for all phases of a production, from concept planning through post.

The ASVP volume wall is composed of more than 3,000 LED panels and 100 motion capture cameras. The volume includes a full LED ceiling with drop-out panels, so that productions can rig up to 350,000 pounds of lights and production gear to its truss.

Stage 15 was originally built in 1940 and was home to productions that included It’s a Wonderful Life, Star Trek (TV show), Batman (TV show), RoboCop, Airplane, The Three Amigos, and Armageddon.

In addition to the LED volume wall, the massive new stage will include a two-story building within its walls, dubbed The Sandbox at Stage 15. This structure will include a virtual location-scouting volume, a performance-capture volume, a tech-scouting volume, a green screen simul-cam stage, and a client-facing VIP viewing area for visiting executives, filmmakers, and guests. This space will also feature a second, smaller LED stage, with a completely mobile LED wall, camera-tracking system, and control cart, along with an engineering workshop, scanning, 3D-printing, production workspace, and equipment storage.