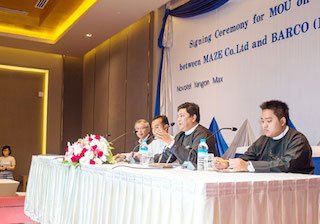 Barco partner Clover Solutions signed a multi-million deal with Maze for the installation of up to 100 Barco digital cinema projectors across Myanmar. The agreement is part of an ambitious project to revitalize Myanmar’s film industry. In the course of two years, 100 new cinemas will be built across the country.

In the early 1980s, Myanmar counted more than 400 cinemas. By 2010, their number had dropped to around 40. The consequences for the country’s film industry are devastating. Producers often have to wait years before their movies are released on the big screen.

After interviewing people across the country, U Lwin Moe, managing director of Maze, discovered that many people were unable to watch films because their area lacked a cinema. “For example, there wasn’t a single cinema in Mawlamyin, despite a population of some 300,000,” he said.

For this project, Maze and Clover Solutions will prioritize towns without a movie theater. So far, two cinemas are already being built: one in Aungban, Kalaw township in Rangoon’s Taik Kyi and in Shan State’s Aungban townships. If these are successful, the construction of another 98 cinemas will start in November, each counting 316 seats.

“Only by building more cinemas can we save the Burmese film industry,” Moe added during his speech at the signing ceremony, which took place July 1. “But we need to attract audiences with good-quality theaters.”

In this context, Clover Solutions and Maze have opted for Barco digital cinema projectors with Alchemy servers. Merging the projector and media service functionalities into one single module, the Barco projector offers increased simplicity and reliability in the projection booth, along with Barco’s trademark image quality and low cost of ownership.

“Our digital cinema projector with Alchemy server was designed to enable exhibitors to go digital with minimum hassle and risk,” said Eddie Tan, general manager, Barco Southeast Asia, entertainment and corporate. “Needless to say, we are extremely honored to see our solution play a vital role in such a fantastic project.”