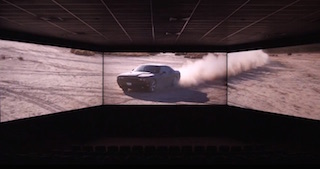 As European motion picture professionals gather in Barcelona this week for the start of CineEurope 2015, Barco will once again be highlighting the Barco Escape format, arguably one of the hits of this year’s CinemaCon in Las Vegas. Prior to CineEurope I got a progress report from Barco executives and some Escape customers about the new format and how exhibitors and audiences have responded to it so far.

Barco Escape features three digital cinema projectors and three screens. The main screen is in the typical center position, while the other two flank it on either side. The format can be used for split-screen images or for a fully immersive panoramic image.

One Hollywood studio – 20th Century Fox – is such a believer that last year it produced, Maze Runner, the first feature film specifically made for the Escape format

“The audience reaction from the Escape footage on Maze Runner was overwhelmingly positive and showed us the movie-going consumer’s appetite for fresh, new, immersive cinema experiences. The one common theme from those audiences was ‘we want more’,” said Chris Aronson, domestic distribution chief at 20th Century Fox. “The audience spoke and we are listening and we will continue to create possibilities for our filmmakers to push the envelope to create these new cinema experiences.”

"As president of post-production for 20th Century Fox, I’m extremely excited about the possibilities of Barco Escape,” said Ted Gagliano. “Immersion in a new kind of cinema experience, [it’s] what audiences are desiring. Interactivity and immersion whether in a theater or VR headset is what we see younger audiences craving, and is the future of cinema” 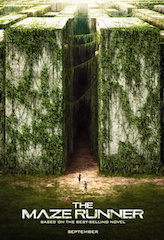 41 percent said they found the Barco Escape experience to be better than other premium movie-going experiences (IMAX, 3D, XD, etc.)

And Barco announced prior to CineEurope that as many as 25 theatres will install Barco Escape in time for the September premiere of Maze Runner 2. The company also said that cinema gaming in the Escape format would be introduced this year.

I spoke with Barco executives Ted Schilowitz, cinemavangelist, and Todd Hoddick, vice president of global entertainment, about what’s next for Barco Escape.

Digital Cinema Report: What lessons did the creative team behind Maze Runner learn about working in the Escape format from their first film and how are those lessons being applied in the sequel?

Ted Schilowitz: More than anything, we learned that audiences were highly intrigued by having an immersive cinema experience in their local movie theater, and as they watched Maze Runner they wanted more of the Barco Escape experience.  So on Maze Runner 2: The Scorch Trials, we are delivering on what the movie goers told us they wanted – more scenes in the Barco Escape format throughout the movie.

DCR: Producer Jerry Bruckheimer said at CinemaCon that he will start producing feature films in the Escape format. When can we expect his first Escape production?

TS: We are currently in creative development with Jerry and his team on a number of projects for Barco Escape, looking at which will be the first production to start with. Bruckheimer Films will announce the project and target dates when we move into pre-production on the first project Jerry wants to pursue.

TS: We are experimenting with both types of cinema gaming, as we know that audiences are highly interested in watching competitive gaming in the Barco Escape experience as well as playing games in Barco Escape, where the game is all around you. This is something that is fundamentally different than the home gaming experience.  There are experiments currently happening in Barco Escape with multi-player games – where some or all of the audience is participating – as well as audiences watching the best gamers in the world play in the most intense gaming venues possible. The game is all around them in a giant sized, multi-screen movie theater experience. 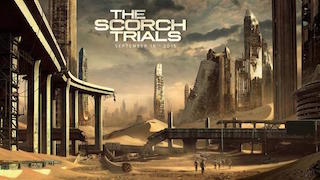 DCR: Some observers have expressed concern about the gaps between the screens in Escape installations. In your opinion, is that a widespread issue and, in any case, how is Barco addressing it?

Todd Hoddick: The gaps between the screens are a continual evolution of the format, as we learn to create the most compelling immersive cinema experiences. Currently the gaps are much more narrow in our generation two Barco Escape installs than in the initial theater installs we did for the first Maze Runner. They are almost imperceptible now. This is what we demonstrated this year at CinemaCon to great reviews and excitement from our exhibitor partners.

DCR: What, if any, premiums are your exhibitor partners charging to experience films in Escape?

TH: Ultimately the pricing of the Barco Escape experience is for the exhibitors to decide, market to market.  We do know from Maze Runner that audiences are really interested in seeing a movie in this way. As Barco Escape content develops and more areas are explored (gaming, advertising, special events, etc.), all of us (the exhibitor, moviegoers, studios, other content providers and Barco) will learn more about what the pricing should be. At the end of the day, all of us in the cinema business are concerned with making sure that we provide compelling content at a price that audiences feel is fair so that they keep coming back to their local cinema.

DCR: How long does it take to install an Escape system in a single theatre?

TH: It takes about four days for normal installation

DCR: If you can say, what does Escape cost to install, operate and maintain?

TH: I cannot offer numbers right now. Barco is working with its exhibitor partners to bring the cost down for them, which reflects its commitment to seeing the format deployed in as many theaters as possible.