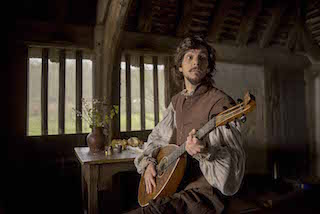 With special behind-the-scenes access including interviews with cast and crew, this tale of murderous kings, spies, conspiracy and lost loves comes to select U.S. movie theaters for one night on April 11 at 7:00 p.m. local time.

Tickets for Bill are available now online by visiting www.FathomEvents.com or at participating theater box offices.

Fans throughout the U.S. will be able to enjoy the event in more than 400 movie theaters through Fathom’s Digital Broadcast Network. For a complete list of theater locations visit the Fathom Events website (theaters and participants are subject to change).

Bill, having been fired as lead lute player from his band, Mortal Coil, sets out to find his fortune in London. When he meets debt-riddled London playwright, Christopher Marlowe, Bill believes his big break has come when the Earl of Croydon offers to put on his play for Queen Elizabeth. Meanwhile in Madrid, King Phillip II of Spain has hatched a plan to rid the world of his mortal enemy, Queen Elizabeth, and seize the English throne for himself. Sneaking into England with a motley crew of assassins, Phillip fools a desperate courtier, the Earl of Croydon, into helping with his devilish plot; but little does he know, King Phillip is using Shakespeare's first work as the centerpiece in his plan to assassinate the Queen.

Bill is directed by Richard Bracewell (The Gigolos) and the producers are Charles Steel (one of the producers of Academy Award-winning The Last King of Scotland), Alasdair Flind and Tony Bracewell. It is a Cowboy Films/Punk Cinema production and has been developed and funded by BBC Films, with the BFI’s Lottery Fund, Screen Yorkshire through its Yorkshire Content Fund and LipSync. Independent Film Company handled international sales.

“The creators of Bill have paid clear homage to the influence of Monty Python in this movie. It’s a wonderful parody on what might have been Shakespeare’s lost years told in that unique British comedic tone. We hope fans of British comedy will thoroughly enjoy it,” said Soumya Sriraman, BBC executive vice president franchise and digital enterprises.

“We love partnering with BBC to provide audiences with special behind-the-scenes access to a variety of programming and Bill is no exception. What a great way to tell the story of William Shakespeare’s life in a way that is fun and entertaining – using typical Brit wit and humor,” said Fathom Events vice president of programming Kymberli Frueh.