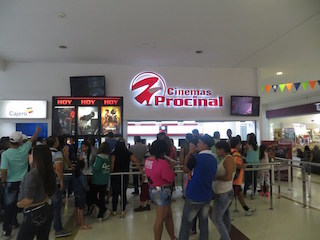 “CE+S is our premier technology provider and most revered trusted advisor,” said Juan Mayungo, director of finance and operations at Cinemas Procinal. “We have been working together for over 25 years and thanks to them we maintain a leading position in the marketplace as one of the most innovative and highest-ranked movie theatre networks in the country, valued for our superior audiovisual and content management technology.”

“We are very proud to keep strengthening our relationship with Cinemas Procinal and to have been selected as their partner to bring the first Dolby Atmos equipped theatre to the Colombian market,” said Luis Arreola, vice president, business development at CE+S. “Together we are committed to continue delivering the most fascinating entertainment experiences to the audiences through cutting edge technology and digital innovation.”

“With Dolby Atmos the audience is no longer watching a movie, they are experiencing it,” said Carlos Watanabe, director, Latin American sales, Dolby Laboratories. “It’s exciting to see the continued growth of Dolby Atmos in Latin America and the tremendous support from CE+S. Dolby is confident that Cinemas Procinal movie-goers in Medellin will go back again and again for the extraordinary experience that only Dolby Atmos can deliver.”

CE+S has been a pioneer in the design and installation of Dolby Atmos technology in Latin America, with four theatres carrying the technology in Colombia, Guatemala and Peru and a fifth one currently in construction in Brazil. In 2014 CE+S built its own Dolby Atmos equipped theatre at their headquarters in Miami to be used as a training and testing center of excellence for their employees, customers and partners.

Aiming to take the audience experience to the next level at Procinal’s Supernova A auditorium, CE+S built an avant-garde, end-to-end audiovisual system that also features a Christie 4K digital projector and a three-story tall silver screen.