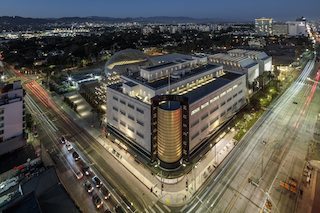 Christie Digital Systems is supporting the new Academy Museum of Motion Pictures in Los Angeles with projection and display technology and professional services. The 300,000 square foot campus of the Academy Museum is the largest institution in the United States devoted to the arts, sciences, and artists of moviemaking.

The museum features exhibitions, programs, screenings, and collections that advance the understanding, celebration, and preservation of cinema across its seven floors, as well as iconic pieces of movie history including a model of the shark from Jaws, droids from Star Wars, and the Dude’s bathrobe from The Big Lebowski.

The Academy Museum’s inaugural exhibitions include Stories of Cinema and The Oscars Experience. Christie GS Series 1DLP projectors will be used to augment the retrospective of legendary filmmaker Hayao Miyazaki in the Marilyn and Jeffrey Katzenberg Gallery. This is the Academy Museum’s inaugural temporary exhibition and features more than 300 objects, including storyboards, posters, and character designs, throughout the seven sections of the retrospective.

“Side by side with original drawings and storyboards, Christie projectors bring Hayao Miyazaki’s films to life in our galleries. The Academy Museum is so grateful to Christie for its generous support of this much anticipated debut exhibition,” says Brendan Connell, Jr. chief operating officer and general counsel, Academy Museum.

“As a company with deep roots in cinema– from 35mm film and digital cinema projectors to our new RGB pure laser cinema projectors, as well as two Academy Awards for Technical Achievement – Christie’s history is intertwined with Hollywood,” says Steve Capling, director, enterprise marketing, Christie. “That’s why we’re thrilled to support the Academy Museum with Christie technology and services to help tell the story of moviemaking.”

Christie Professional Services has been engaged to proactively maintain the AV systems throughout the Academy Museum with 24/7 technical support and rapid onsite field service.

The museum opened to the public last week.