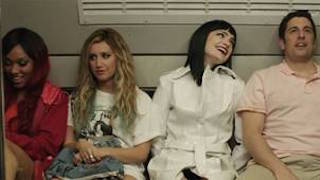 Cinedigm has acquired all North American distribution rights to Amateur Night (formerly Drive, She Said). The film will be released theatrically mid-2016, and will be simultaneously made available on digital and TV VOD platforms, with a DVD release to follow later in the year.

The film centers on Guy (Biggs: American Pie; Orange Is The New Black), an out-of-work and down-on-his-luck expectant father desperate to find a job to support his family.  At the urging of his wife (Mollen: Crazy Stupid Love; Extracted), he answers a Craigslist ad to be a driver.  He’s in for more than he bargained for when he learns he’ll be the driver for three charismatic call girls (Tisdale: High School Musical; Montgomery: Black Swan; Salem; and Murphy: America’s Next Top Model; The Game) as they make their evening rounds, which turn out to be anything but typical. Also starring in this fish-out-of-water comedy is veteran actor Steven Weber (Wings; Single White Female), Cedric Yarbrough (Crazy Ex-Girlfriend, Comedy Bang-Bang) and Adrian Voo (Little Bitches).

With their true-life story inspiring the movie (and the casting: Jason Biggs and Jenny Mollen are also married in real life), the script was written and directed by husband/wife team Joe Syracuse and Lisa Addario (Surf’s Up; the Billy Crystal-Bette Midler comedy Parental Guidance).While trying to catch their big Hollywood break as writers, Syracuse had a lucrative — and sometimes dangerous — job driving call girls around Los Angeles while Addario was pregnant with their first child.

"We are thrilled to be in business with Cinedigm. Their passion for this film is matched only by their enthusiasm for getting it out to audiences in a smart, strategic way,” said Syracuse and Addario.  “They’ve had great success with edgy, comic titles like ours.”

“Amateur Night is a fun, refreshing comedy, but it also has so much heart,” said Yolanda Macias, Cinedigm's executive vice president of acquisitions, "which makes it exactly the kind of off-beat, original indie film that Cinedigm is proud to champion. We couldn’t be more excited to be working with this talented filmmaking team."

The deal was negotiated by Cinedigm's Kristin Harris, Executive Director of Content Acquisitions, and United Talent Agency on behalf of the filmmakers.

International rights are represented by The Works who will be screening the film under its new title at the forthcoming European Film Market in Berlin.