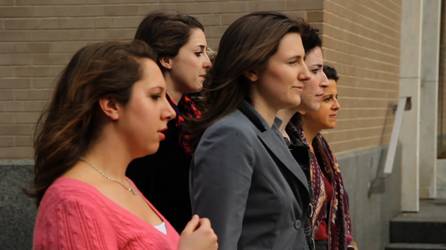 Cinedigm has acquired North American home entertainment rights to It Happened Here, the compelling new documentary from director Lisa F. Jackson and producer Marjorie Schwartz Nielsen that explores sexual assault on campuses through the personal testimonials of five survivors who transform their experiences into a springboard for change.

In the same distribution model that Cinedigm used for its Oscar-nominated documentary The Invisible War, which documented the rape epidemic in the US military, Cinedigm will roll out the film across all platforms including physical, VOD and its OTT channel, Docurama.

In raw and intimate interviews, the students describe surviving sexual assault only to be met with apathy, disbelief, blame and retaliation from the authorities when they tried to report the crime. When they tried to get justice, they were ignored, belittled and shamed, while their attackers remained on campus with impunity. But instead of hiding away in shame, they chose to speak out, and found a way to force institutional change.

Jackson’s resume for the last 10 years has reflected a singular focus: violence against women. From such subjects as war time rape (The Greatest Silence: Rape in the Congo); the connection between rape and violence in Colombia’s civil war (Tres Mujeres), and a portrait of prosecutors in the Manhattan District Attorney’s Office dedicated to rape and sexual violence cases (Sex Crimes Unit), Jackson’s films have taken an unflinching look at this most disturbing crime.

The film had its broadcast debut on Pivot January 21.  In February, as part of the It's On Us campaign launched by the White House to educate college students about sexual assault, the documentary will be screened at college campuses across the country.

“When producer Marjorie Nielsen approached me to direct a film that exposed the epidemic of sexual assault on American college campuses, I knew immediately that I was all in,” said Jackson.

“I’ve been working in film production and screenwriting for over 30 years,” said Nielsen. “But nothing comes close to the humility, pride and gratitude I felt working with these five remarkable young women who let us into their lives and shared their harrowing stories.”

“This is a profoundly important subject,” says Susan Margolin, president of Cinedigm’s Docurama brand.  “The film exposes an outrageous and prevalent attitude among many college administrators that assigns guilt to the victim, not the perpetrator. It is our hope that this film will provoke discussion and lead to policy changes so that more young women don’t have to endure the agony of the students in this film.”