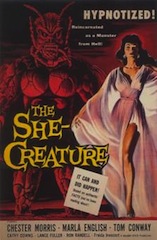 Cinedigm has started a unique 10-picture project with producers Lou Arkoff (Inspector Gadget, George of the Jungle), Jeff Katz (Snakes on a Plane) and Hal Sadoff (Hotel Rwanda), to deliver a complete reinvention of some of the quirkiest and most memorable movies in the famed American International Pictures portfolio.

Storylines and characters from all 10 films will be part of one grand story arc. The films will be shot contiguously starting in September, with cast and directors to be announced soon. In addition to his producing credit, all ten films were written by Katz.

For years, poster art from such 1950s movies as Girls in Prison, Brain Eaters, and The Undead has been among the hottest collectibles in the film memorabilia market. Cinedigm will now bring updated versions of these pop favorites to modern audiences via  theatrical release, DVD, digital, TV and non-theatrical formats.  Of particular relevance, the films will be featured on CONtv, Cinedigm’s highly anticipated digital network targeted to the Comic Con audience.

“In a unique twist on the current film-making model, all 10 films will shoot back-to-back and share a single movie universe with a big recurring cast of antiheroes, monsters and bad girls,” says producer Lou Arkoff, son of AIP founder Samuel Arkoff.  “This format will allow our casts and directors to build a strong relationship with the characters – and our audience over the course of several films.”

“There is no doubt that these titles have continuing allure,” says Bill Sondheim, president of Cinedigm Entertainment Group. “These films are entertaining and fun and have resonated with audiences for over a half a century.  With the changing nature of film consumption in mind, Cinedigm has come up with a completely unique distribution pattern for the films, providing one quirky and slightly naughty film each month for a new generation of fans.  We love that Lou, Jeff and Hal have created a shared universe for these indelible characters to inhabit and we’re looking forward to offering them to today’s entertainment-hungry marketplace.”

"It's been a very exciting opportunity to experiment with this hybrid format - binge-viewing at the feature film level - and it's something I think audiences are more than ready for,” says Katz.  “Each movie in this series has a complete beginning, middle and end, yet watched over all 10 films we're really telling one larger, epic story. These are very much, at heart, indie comic book movies. Unpretentious. R-Rated. It's fantastic to have a distribution model that fits that sensibility."

“The timing is perfect to re-invent these classic AIP titles,” Sadoff says. “The independent film marketplace has never been stronger. Cinedigm is the perfect partner to take advantage of the traditional, as well as the new and exciting, distribution platforms for consumers to access content.  We will be working with established and cutting edge talent to create films that are fun and commercial, while honoring the spirit of the classic AIP titles.”

War of the Colossal Beast

The Cool & The Crazy