Replacing the world’s 35mm projectors with digital ones was the beginning of the digital cinema era, not the end. Now, with the end of the virtual print fee deals in sight, exhibitors are exploring what new technologies they can use to manage theatres, excite moviegoers and grow revenue. As was the case last year, the major technology topics of CinemaCon 2016 were laser projection, theatre sound, and immersive cinema. Leading exhibitors understand that their future success demands that they rethink virtually every aspect of their businesses, and that they must transform their movie theatres into entertainment centers designed to serve their specific communities. The best of them are making great strides to that end and CinemaCon 2016 brimmed with their energy.

That said, there were relatively few new developments in technology. The best of those will be covered later this week when Digital Cinema Report announces the winners of this year’s Catalyst Awards for the most innovative new products at CinemaCon 2016. The trend of this year’s show was upgrades and refinements to technology already on the market.

In event cinema news, Screenvision Media and KAOS Connect announced the launch of their first joint event cinema program – the empowering theatrical documentary produced by Meteor 17 CEO, Spencer Proffer, I Hope You Dance, The Power & Spirit of Song. The documentary film features stories of faith, inspiration and overcoming unimaginable odds as told through the transformative power of song. I Hope You Dance will premiere on Monday May 16, with encore showings on Monday, May 23 in select theatres nationwide. The announcement falls on the heels of the Screenvision Media and KAOS Connect’s alliance announcement earlier this year.

Barco and Bad Robot Productions announced that Star Trek Beyond, one of this year’s most anticipated films, will be released in Barco’s multi-screen theatrical format Barco Escape. J.J. Abrams’ Bad Robot has agreed to master a special version of the film, expanding the storytelling across three screens to unveil a thrilling new movie going experience to audiences when the film, from Paramount Pictures and Skydance Productions, releases on July 22. For its part, ScreenX announced four feature films that will be released this year in the immersive multi-screen format. They include two Korean films and two Chinese films. The first, Operation Chromite, follows the heroic Korean soldiers who carried out a pivotal covert operation during the Korean War.  Liam Neeson stars as General Douglas MacArthur. Lee Jung-jae and Lee Beom-soo also star. The film is directed by Lee Jae-han and produced by Taewon Entertainment. ScreenX will be utilized during the battle scenes as well as some of the other key action sequences. That film will also be released in July.

In other business news, Regal Entertainment Group announced a partnership with Atom Tickets, the theatrical mobile ticketing platform and app. The app launched in select markets across the U.S. with Regal earlier this year and is projected to support over 7,300 screens by the end of the year.

Vista Group International announced that it has signed a strategic partnership with Powster, a digital interactive and motion-graphics company providing film-specific marketing solutions to film studios both in the domestic USA market and internationally. Powster is based in London, United Kingdom, and focuses on the entertainment industry by providing bespoke marketing concepts and creative builds, including marketing campaign capability, music videos, social media strategies and interactive content. For the film industry, Powster bridges a gap between distributors (studios) and exhibitors (cinemas) with its comprehensive range of movie-specific marketing tools, notably its movie ticketing platform where show times for a particular film are listed by territory. The Powster Movie Platform is an integral part of movie marketing for over 40 film studios.

CJ 4DPplex announced that the company has signed a contract to open the first 4DX auditorium in Kuwait with KNCC (Kuwait National Cinema Company), the country’s number one cinema operator. Also, 4DX has signed an MOU with China’s SFC (Shanghai Film Corporation) early this month, which opens the way to an in-depth discussion on the actual launch of 4DX theaters. 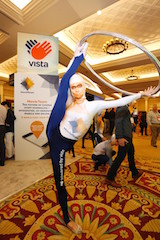 Christie announced that it is expanding its series of laser phosphor projection systems with the global launch of the DCI-compliant Christie CP2208-LP digital cinema projector. Delivering up to 11,000 native lumens of brightness, the 3D capable Christie CP2208-LP is virtually maintenance free with no lamps to change, offers a lower total cost of operation, and provides a lower carbon footprint for theater owners. It is available as a complete system with the optional Christie IMB-S2 integrated media block and also works with other, popular Series-2 IMBs. It delivers superior content flexibility with its ability to display DCI content, alternative content, 3D content and content developed at high frame rates.

Barco introduced a high-contrast version of its Flagship Laser series. With a contrast ratio of 6000:1 it doubles the contrast of the existing Flagship Laser high-brightness version and almost quadruples the contrast of 4K lamp projectors while still reaching brightness levels up to 40K lumen. Exhibitors will have the opportunity to change versions over the lifetime of the projector.

Finally, during the show the Society of Motion Picture and Television Engineers announced that Ymagis Group, the European specialist in digital technologies for the cinema industry, has used the next generation of SMPTE's Digital PROjection VErifier (DPROVE2) to simplify and accelerate adoption of the SMPTE Digital Cinema Package (SMPTE-DCP).

In tight collaboration with its two business units — CinemaNext and Eclair, respectively dedicated to exhibitor services and content services — Ymagis Group conducted the first wide-scale tests with SMPTE's DPROVE2, evaluating all 8,612 screens in its network to make the migration from Interop DCP to SMPTE-DCP, and found potential need for updates in less than 1 percent of the projectors.