Close Encounters of the Implosion Kind 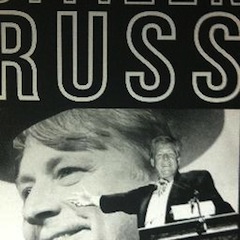 [Editors Note: As has been widely reported, in recent weeks filmmakers Steven Spielberg and Steven Soderbergh have predicted that Hollywood will implode if the major studios continue to invest only in tent-pole movies and endless sequels. In a guest column Russ Collins, artistic director of the Cinetopia Festival, CEO of Ann Arbor’s Michigan Theater and director of the Art House Convergence, takes exception.] Steven Spielberg is a gifted filmmaker whose impact on the art and business of cinema is arguably peerless. Steven Soderbergh is a gifted and important filmmaker. The aesthetic and financial success of both Stevens is unquestioned. However, both of these cinema icons have come out with almost bitter assessments of the future of movies recently. I believe these assessments are wrongheaded. Maybe it’s because the pessimistic assessments come from these two cinema idols that it makes me sad and a little mad.

Change is certainly in the air, but it is disappointing that an older moviemaker, like Steven Spielberg and the soon to retire Steven Soderbergh (or maybe it’s just the opinion of filmmakers named Steven!) see only gloom in clouds of change. Change is hard. It frequently makes us feel discouraged or unfairly challenged. The shifting sands of change can cause us to see threats everywhere and feel the world as we know it will end.  However, maybe we feel this way because it’s true. The world as we know it will indeed come to an end because change is the only constant, and creativity in art, business and all things is frequently born from what might appear to be destructive forces brewed from dynamic change. It is a defining story of living; a baseline truth, an ever-repeating cycle of human existence that the Hindu religion represents so effectively in the story Shiva, whose joyous dance of destruction celebrates the cycle of creation, preservation and dissolution.

Movie attendance at theaters in the USA by the late 1940s appeared stable at four billion admissions per year.  By the early 1960s movie attendance at theaters had fallen dramatically and re-stabilized at around 1 billion admissions per year – the theatrical audiences was just 25 percent of what it had been 16 years earlier. It’s hard to imagine. We can feel better about movie attendance over the last 16 years because at about 1.4 billion annually, USA theatrical movie admissions have been fairly stable.  However, as a highly profitable, highly centralized business model, the movies – the pre-TV, Hollywood studio system heyday of the ‘20s, ‘30s and ‘40s – died in the 1950s. 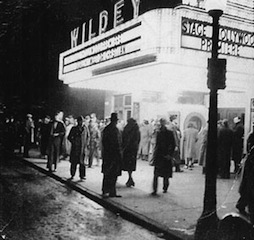 Shiva danced and Hollywood’s heyday died as television became a mature mass media market. During the 1950s, television replaced movies as the mass-market media phenomenon of the 20th century. So the truth is, since the 1950s, movies, meaning all movies shown in theaters, are not mainstream.

Today, broadcast television is flat on its back because pay-per-view, paid-legit streaming, pirate streaming, cable, computer, smart phone, tablets, etc. are the television of today.

During the second-half of the 20th Century, the era in which TV has dominated, movie journalists and scholars seem to divide the post-Hollywood studio movie era into the following sub-eras: The foreign film art house/college movie society/sex, drugs and rock & roll generation saves the Hollywood world of the late ‘50s, ‘60s and on into the mid-70s; The indie cinema/burgeoning home video Hollywood summer blockbuster world of the late-‘70s, ‘80s and ‘90s; The DIY-Mumblecore/Funny or Die/pirate ethos /digital transition/Netflix queue Hollywood comic book-remake world of the early 21st century.

People in the movie business of different generations attach a “halcyon days” glow to different eras. 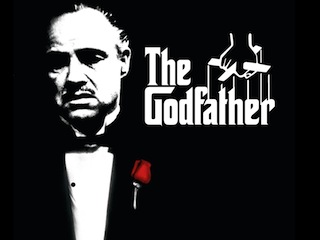 Probably folks like the Duplass Brothers, Greta Gerwig, Debra Granik, Benh Zeitlin, the Funny Or Die guys and gals and other filmmakers finding success in the current era will look back at the 2000s as a halcyon era of celluloid dreams found during the digital transition. An era that provided limitless YouTube possibilities, when the number of community-based, mission-driven Art Houses cinemas were growing (due to the Art House Convergence!) and everyone had the ability to earn a post graduate motion picture education at Netflix U.

So, instead of filmmakers and pundits making broad statements assuming that movie exhibition exists as one giant main stream market; let’s instead think about the theatrical exhibition market place as the segmented and diverse market that it is – and has been for generations.

The media and the general public seem to easily accept sweeping unsubstantiated statements about the movie exhibition market place. However, people seem to have a more nuanced and complex understanding of the music market. No one thinks of Lady Gaga, Winton Marsalis and the Boston Symphony playing to a large, singular music market. People seem to understand that each of these artists has their niche. So if pundits or a prominent musician said that the music industry will collapse unless arena shows continue to be successful (by the way, there are fewer and fewer arena shows these days), that pundit or musician would be mocked by Jon Stewart on the Daily Show.

However, this is basically what Steven Spielberg said would happen to the film market.  To illustrate this point I have replaced references to movies, in Steven Spielberg’s recent statement postulating that the movies will “implode,” with the appropriate musical reference: 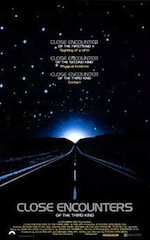 Spielberg is a great artist in my opinion. He has a peerless career. His artistry and craftsmanship was so resonant with broad audiences in the 1970s and 1980s, that he was significantly responsible for creating the summer blockbuster dynamic (Jaws) that allowed for the development of “megabudget” movies.  For him to say that young filmmakers and film students are “too fringe-y” is absolutely true – they always have been fringy (but some are not – which is also true).  To say that “[an implosion is] going to change the paradigm” is also true, because something is always changing paradigms – clearly Spielberg was an innocent agent of paradigm change as a young filmmaker!

Think about the world that Spielberg came into as a young filmmaker in the late 1960s and 1970s. The old line Hollywood Studios were reeling. There were no megaplex theaters – the movie exhibition innovation of that era was multiplex cinemas in shopping malls with postage stamp size theaters and screens.  These shopping mall cinemas were causing the few remaining movie palaces, as well as single screen neighborhood cinemas to be abandoned or “twinned” or “quaded.”

In the 1970s there was no generally accessible Internet or movie streaming. For all intents and purposes there were no video rental stores or home video. Spielberg’s career was established during a period of a huge paradigm shift. He benefited from the newly created blockbuster movie marketing. He profited from the soon to follow home video explosion.  But, I have to imagine from Spielberg point of view, the paradigm shift in the 1970s was just the new “normal,” a “halcyon era” from which we are straying in the 21st century – because theatrical exhibition is tenuous (as it has been since the 1940s), the home video markets has dried up and people are watching pirated movies on their phone. Spielberg’s coming of age era was for him the halcyon period that the 21st century “implosion” will cause to go “crashing into the ground.”

But he is wrong. As said previously, the market for movies is actually diverse and highly segmented – although from the top down movie industry vantage point and media punditry you would not think this to be true.  Would we really mourn for Spielberg or ourselves if Lincoln would have been made for cable or had played on Public Television? Is it bad for humanity that cable television is creating wonderful, resonate stories in long-form moving image series that people want to watch at home on TV (or streamed onto their computer)? I don’t think so, but it is a paradigm shift and it might affect people’s theatrical movie going habits. Televisions in people’s homes have had that effect for seven decades – it is not a new phenomenon. 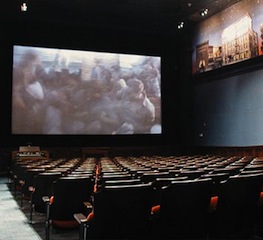 Commercial movie theaters have had several “implosions” through the years and new, effective and profitable paradigms have emerged.  1920s era Movie Palaces killed Nickelodeons, the mom and pop storefront cinemas that establish movies as a viable art form and profitable market. Mom and pop theater owners were very upset and felt unfairly treated by the Movie Palace paradigm shift; it was a most tumultuous and difficult era in theatrical movie exhibition.  Technology forced dynamic change as talking pictures made Movie Palaces inefficient. What emerged was the more efficient but less spectacular, single screen cinema-style theaters of the 30s and 40s. Television nearly killed single screen theaters and Movie Palaces, and the shopping mall multiplex theaters of the 1970s finished the job.

Megaplexes killed multiplexes.  Who knows, maybe megaplexes will be killed by high-priced deluxe cinemas with fine dining options – who cares! Maybe all commercial theaters in the future will be like Imax theaters. The paradigm shift that takes down the megaplex is not a dynamic we as an Art House community will control. We can learn from and adapt to whatever changes may occur to the Megaplex paradigm. However, we do not control those changes so it is fruitless to fret about them. The cinema market is large and diverse and our job is to focus on our small but essential piece of the movie market – the community-based, mission-driven piece of exhibiting cinema to movie lovers in our hometowns.  As Ira Deutchman said to us at the Convergence, we must understand and embrace the fact that what we do is hard, but we should never take the easy path.

Being connected to your community you have a role in defining that community. You can make sure your community values having an Art House. You must strive to be consistently innovative in how you run your Art House; this will create consistent success.  But it requires capital, hard work and the willingness to adapt to changes; changes in technology (digital cinema), in programming (day and date release with home viewing opportunities), in being an effective fund raising professional and a teacher of moving image aesthetics, history and practice. You are the impresario of the most important cultural product created in the American century.  You deserve to be a key quality of life institution in your community.

Although the venal dynamics of Hollywood cause the Art House to be undervalued, we must remember that the Art House is vitally important because it is where the beating heart of cinema culture lives.  We must keep that heart healthy.  Let us execute our heart based Art House cinema in the best possible way, for its own sake and for the general health of our community and cinema art. And, please, let us not be afraid of change.

Change is inevitable. It is foolish to think that change will not happen. Change brings with it opportunity, and there is great opportunity for the Art House to flourish. Why? Because there are more movies made now than at any time in human history. This means all vital channels in which cinema can be presented can succeed – they won’t, but they can. And the community-based Art House has a distinct advantage because, as we have known for a little over 100 years ago, seeing a movie on a big screen, in a darkened room full of strangers is a profound and moving experience. Many humans, many of our neighbors seem to need the experience of gathering communally to experience stories and receive information. The Art House is that place, because it is the community’s living room, or better still, the communal campfire where people can learn, be entertained and transported by stories that are spun by that most brilliant of story tellers – the motion picture.

Keep the faith, Art House friends. You are the best, now let’s get better!