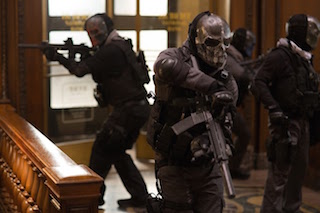 Senior colorist Mike Eaves collaborated with Miller and award-winning cinematographer Brandon Cox to finalize the look of the film with editorial and color grading completed on an SGO Mistika.

Starring Bruce Willis, Christopher Meloni and Adrian Grenier, Marauders centers on a series of brutal Cincinnati bank robberies that turn out to be part of much broader conspiracy involving the city’s moneyed elite. The atmosphere is dark and moody throughout, a feeling intensified by nearly continuous rainfall. Rain is a brooding presence even in interiors, where it relentlessly batters windows and doors.

“We wanted to capture the feel and tone of Cincinnati, which becomes almost another character in the film,” said Cox. “Steven Miller came up with the idea of adding rainfall during pre-production and it was a great decision. It added another texture to the story.”

All of the rain was produced artificially on the set. Cox made subtle use of backlighting to create contrast between the falling drops and background elements. The look was further enhanced during post-production grading sessions with Eaves at Cognition.

“Rain is tricky,” said Cox. “You have to work in rain gear and cover the cameras; our special effects coordinator, Kenny Gorrell, did an amazing job corralling the rain. By the time it got to Mike Eaves, the footage was flat and milky. Mike added contrast and color separation, and was able to bring out the rich textures of architecture and skin tones.”

Visually and stylistically, the finished look recalls classic crime dramas and portrays a world that is raw and real. “All of the exteriors are cold and bluish,” said Eaves. “The look beautifully complements the sound and visual aspects of the rain. It’s a bold look.”

Marauders employed ACES from color through delivery. “It was exciting to be the first film in the new theatre,” says Cox. “It’s a fabulous space and the results Cognition delivered were great. They rolled out the red carpet for us.”