The Coldplay music video Magic, shot by cinematographer Par Ekberg, has scored more than 53 million views on YouTube and Ekberg’s work on it earned him a Best Cinematographer nomination for music video at the recent Cameraimage festival.

The black and white, silent film-look video was shot on a circus tent sideshow set near downtown Los Angeles, with many interior and exterior locations. “We were really spread out,” said Ekberg, “it was like 10 different circus tents. I had a basic setup for the whole area, with a lot of fixed lights all over the ring for ambient lighting so we could move seamlessly from one location to the other. The Area 48’s low power draw allowed us to run them on batteries so we didn’t have to fool with cabling. We had them on roll-around light stands and being able to wheel from location to location enabled me to do a lot of stuff in a short period of time.” 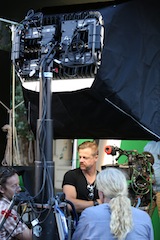 The portability, even light distribution and full dimming-range of the Area 48s proved valuable on the hectic music video shoot. Ekberg wanted to remain true to the silent film era look of the images, “so I always had a kind of solid light, Fresnel or flare, imitating that harsh look. But when you go for that classic silent movie lighting, you sort of end up with a very dull image. I had to somehow spice it up and give it some depth. That’s where the Area 48s came in.

“We were pressed for time, but I could always throw the Area 48 into place, turn the dimmer up to where I wanted it, and get that little edge, or little bounce or definition on the cheek. When I was using mostly spots, the Area 48s just filled it in here, added accent there, produced backlight elsewhere. There’s no other light that I’ve worked with that gives me the same versatility.”

Though the official version of Coldplay’s video was entirely black and white, color footage shot for a director’s cut provided a flashback and forth between the silent film past and a storyteller in the present. Ekberg relied on the accurate color rendering of his Area 48 lights to bring out the proper colors.

He says, “The first thing I noticed when a gaffer friend introduced me to the Area 48s was that they’re a powerful, dimmable source that is really true in color, that I could basically throw in wherever I wanted and get a lot of punch out of it.”

The interchangeable remote phosphor design of the Area 48 fixtures gave Ekberg color rendering he could count on, plus he had the ability to quickly change the color temperature of the light while still maintaining the same high output light levels.

In addition to music videos, Ekberg, who works extensively in Europe as well as the United States, is busy shooting commercials in the beauty, fashion and automobile arenas. One constant is that Area 48 lighting is always on the set with him.