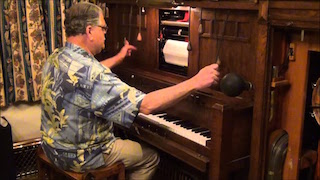 The Hollywood Section of SMPTE will host a demonstration of classic movie sound technology at its monthly meeting Tuesday, July 25, in Hollywood. The event will include a live performance by Joe Rinaudo, founder of the Silent Cinema Society, on an American Fotoplayer (provided by the Academy of Motion Picture Arts and Sciences). The Fotoplayer is a type of player piano used in movie theaters during the silent era to provide sound effects and music.

Motion picture archivist Bob Heiber will deliver a presentation on restoring magnetic soundtracks from the 1950s. He will also screen sequences from 70mm Todd-AO and Cinemascope 55 productions, including Oklahoma and The King and I.

“Movie sound has undergone an incredible evolution since the early days of cinema,” said Jim DeFilippis, chair of the SMPTE Hollywood Section. “Our July meeting will provide a wonderful opportunity to experience what movies sounded like before the sound era, as well as when widescreen and stereophonic sound first hit theaters.”

The event, which is being produced by SMPTE Life Fellow, Dick May will be held at the Academy of Motion Picture Arts and Sciences, Linwood Dunn Theater,1313 Vine Street in Los Angeles. Free parking is available behind the building.