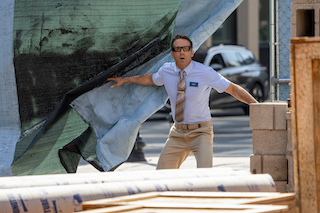 In 20th Century Studios’ Free Guy, the lines between real and digital are deliberately blurred, with the focus jumping between live-action and CG based on the point of view of the characters. For the filmmakers, it was like creating two movies in one, each requiring different visual effects techniques, from replacing actors with digi-doubles to creating entirely computer-generated cities. To take on that challenge, 20th Century Studios turned to veteran VFX house and Oscar winner Digital Domain. [Editor’s Note: Warning, this article contains spoilers.]

“We worked closely with Shawn Levy and the filmmakers to essentially create Free City twice, once by augmenting live-action footage with digital additions, and again as a fully CG environment right out of a video game,” said Nikos Kalaitzidis, Digital Domain VFX supervisor. “There’s really nothing else out there that is quite like it, and that allowed us to do things we’ve never done before.”

Free Guy begins with a live-action introduction to the metropolis of Free City, as one of the game’s top players makes his dramatic entrance. As the character BadAss plummets toward the city, filmmakers used a combination of digital and practical effects, beginning with footage of the actor in a wire harness suspended by a retractable crane. BadAss soon turns his descent in a low opening skydive, featuring a CG parachute, landing perfectly in a waiting convertible supercar. To make the transition from the fall to the landing, artists at Digital Domain created digi-doubles of the actor, making an otherwise impossible stunt seem natural.

As the car speeds off into Free City, the filmmakers used a multi-camera rig and a crane on the car itself to film on the streets of Boston and against green screens. Digital Domain took that real footage of the car, the actor, and the actress in the passenger seat, and created a new set of digi-humans for each performer, along with a CG model of the car. They then switched between live-action and digi-doubles as the car dodges grenades, crowds, trees, motorbikes and more, all added by Digital Domain. Using a combination of live city footage with plates and CG buildings, the scene then pans up and through the window of the film’s protagonist Guy (Ryan Reynolds), as he awakes blissfully unaffected by the insanity around him.

Digital Domain began with previsualization, providing the filmmakers with multiple iterations of the city and what the world in general looked like, from both the live-action and game sides. Once Guy begins to gain notoriety, players frequently see his avatar wandering through the digital version of Free City. To create the game setting, Digital Domain used the previs assets, and built more than 89 3D environments, created from modular buildings, then altered with different textures and materials. Artists then added individual flourishes by hand to replicate and stylize the real-world locations, including storefronts, residential and commercial buildings and more.

To create the digital protagonist, Reynolds went to Digital Domain’s motion capture stages, where the actions for his movements were recorded and added to a library. He participated in a series of facial scans, all of which were combined to create a game-version of Guy that was like Reynolds but slimmed down and stylized.

With Guy’s legend growing, the two worlds blur more and more, leading to a confrontation at a construction site. As two players sent by the developers – one dressed as a pink bunny, the other as a cop – chase Guy into an unfinished skyscraper, Digital Domain created both the interior and exterior of the building. The actors then performed in front of green screens and physical set pieces, allowing the filmmakers to create a superhuman chase.

As the action progresses upward, Guy jumps from floor to floor with inhuman ability, dodging weapons fire throughout. To allow Guy to move with unnatural movement, Digital Domain introduced a digi-double of Reynolds, while also adding additional props and environmental damage to fill out the scene. The environment then begins to morph thanks to the machinations of the game’s programmers. Digital Domain then ensured the shifting building retained the proper scale against the actors, while artists continually adjusted the lighting and textures. Guy eventually reaches the top of the building, where drone and helicopter footage was used to convey the sense of movement. It also gave a foundation for the live-action world outside, which was altered to reflect the fictional city’s skyline.

nd. To create the scene, the filmmakers used a stunt performer on wires positioned against a green screen for close shots, and a digi-double version of Reynolds for the wide shots and the more extreme bounces. Reynolds himself was then filmed in a prop bubble to show Guy after reaching the ground. The footage was then combined with recordings of a fast descent captured by a drone.

Digital Domain also helped to create Free City’s Multiplayer Lounge, a location where avatars can mingle, explore in-game weapons and watch feeds of the game world on large jumbotron screens. The multi-story structure regularly features dozens of players, all of which were recorded separately against a blue screen and added later by Digital Domain. The footage of the game – including a memorable moment when the live-action Guy sees a digital version of himself – were also provided by the VFX studio.

Along with the digital version of the main actors, Digital Domain also created an additional 46 3D hero and background assets to help populate Free City.

When Guy grows too popular, the developers decide to reboot the game and start over. The sequence needed a unique look that still honored the game motif, so Digital Domain went back in time. Artists referenced low-res texture mapping and glitches from '80s video games.

The deletion of the world was completed using a relatively new technique known as data-moshing, where movement in one layer of footage is applied to another. The result is a scene that looks as if a digital video has been pixelated and damaged. To create this effect, Digital Domain used Houdini to render low-res texture maps, while combining it with Nuke. After a psychedelic final swirl, the world disappears, leaving a white void where only Guy remains.

Along with the traditional digi-double work and animated characters, Free Guy also marks one of the first feature film uses of Digital Domain’s proprietary face-swapping tool, Charlatan. Utilizing neural networks, Charlatan takes existing footage and analyzes the movements down to the minutia. Artists then introduce a new face digitally constructed by hand, and the neural network in Charlatan matches it with the existing footage, replacing the original performance. Artists can then alter the facial movements to incorporate new expressions.

Late in the film, BadAss gives a speech with far-reaching implications. It’s vital to the plot and tone, and after seeing the finished results, the filmmakers decided that they needed to change the dialogue and add to it for the scene to have the necessary impact. Rather than schedule a new series of reshoots and force the actor back to read a handful of lines, various methods of animating the digital character were employed, with none producing a realistic and acceptable result. So Digital Domain decided to try Charlatan.

Artists created a new facial model of BadAss by hand, then used Charlatan to combine it with the original performance. Once the neural network was able to link the two and replace the original animation, the results were a more realistic digital avatar that could then mimic the actor’s facial mannerisms and movements to mimic reading the new lines. The actor then later recorded the new dialogue in ADR.

“Free Guy was an ambitious project that required expertise in multiple techniques and disciplines to make it. And that’s exactly what Digital Domain was built for,” said John Fragomeni, global VFX president at Digital Domain. “We worked closely with the filmmakers to help create a unique look and feel for the live-action world of Free City and the gameplay world, and we think audiences are going to be blown away by what they see.”

Free Guy is in theaters now.