Deluxe in Talks to Acquire Éclair 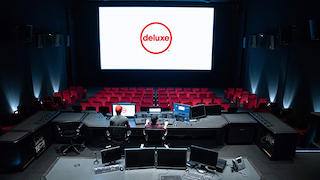 Deluxe and JMS Group announced today that they have entered into exclusive discussions to finalize the acquisition by Deluxe of Europe based Éclair Theatrical Services, a provider of cinema services including mastering and electronic delivery to content production studios and distributors controlled by JMS. Financial terms were not disclosed. Deluxe is a portfolio company of Platinum Equity.

Established in 2013, ETS has established operations in France, Spain, Portugal, Germany, Austria, Italy, Belgium, Denmark, UK & Ireland, and North America with additional points of presence in growth markets including Central Europe and LATAM. ETS is an established provider of digital cinema content mastering and electronic delivery for independent distributors and studio clients throughout its operating territories.

“This project is of great importance to Deluxe. ETS would provide us with an expanded and enhanced footprint throughout Europe and more than 3,000 cinemas in 20 territories connected to the broadband based electronic delivery network” said George Eyles, Deluxe executive vice president and general manager of worldwide cinema.

Eyles continued, “in conjunction with our recent announcements regarding our acquisition of Sundog and investment in Gofilex, ETS would perfectly complement our strategy to stay ahead of the increasing complexity and scale needs of our customers’ day and date multiplatform releases, and to create a sustainable electronic delivery platform.”

Jean Mizrahi, CEO and founder at JMS, welcomed the announcement. “We are incredibly proud of the development of the ETS group since its inception in 2013, which is the result of the hard work of the company's teams. After starting the business with mastering and hard drive logistics in France only, we brought together the three satellite platforms that were delivering films to European theaters, and we have recently completed the migration of our network from satellite to the much more efficient terrestrial fiber delivery. With a presence in a large part of Europe, we are convinced that the future of the company lies in a new phase of growth and investment that will allow it to expand its international presence, and we are convinced that Deluxe can be the ideal partner for the company to take this next step. This transaction, if completed, will not only accelerate the development of ETS, but also strengthen the financial resources of the JMS Group for its future growth.”