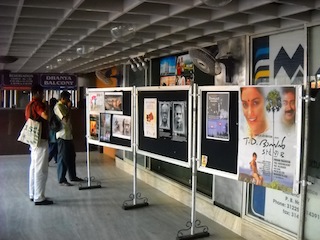 The Dhanya Theatre, from the Dhanya & Remya theatre complex located in the town of Kollam and owned by the Muthoottu Mini Theatres group, has opened the company’s first Barco Auro 11.1-equipped digital cinema. Being the first to install this sound system in India’s Kerala region, the Dhanya Theatre lives up to its promise to consistently offer its audience the best possible digital cinema experience.

Traditionally, India has always been a major regional center for film, supported by a vast film-going public and a movie industry that ranks amongst the largest in the world. As a consequence, competition between multiplex cinemas is fierce. Providing audiences with an immersive auditory experience in addition to crisp clear images has proven to be a powerful tool for differentiation.

“With Auro 11.1, we are aiming to reach the level of perfection in sound that we’d already achieved in imaging,” said Abel Garamhegyi, vice-president sales-MEAI and region managing director at Barco India. “The reason for this is that people are driven by both sound and pictures, so we need both to create a total impression. And it works: bookings for Auro 11.1 halls are much higher than the industry standard 5.1.”

Always looking for ways to improve the movie going experience of Dhanya & Remya Theatres, Roy M. Mathew, managing director at Muthoottu Mini Theatres, instructed sound engineer to investigate new sound and projections systems that could be installed in the new theatre complex in Kollam. In Chennai, the engineer visited GM Audio and an Auro Theatre to witness the Indian blockbuster Vishwaroopam in Auro 11.1. “I was astonished by the immersive experience that ensued,” he said. “It didn’t take long to realize that this platform could give us the best possible performance at an affordable price. On top of that, it is easy to use and the implementation can happen really quick, without any show losses.” Soon after the demo, Mathew contacted the people at GM Audio again to conclude the contract and install Auro 11.1 sound solution at the Dhanya Theatre in Kollam.

By using a minimum number of speakers to create a 3D sound experience, Auro 11.1 by Barco proves to be a cost-friendly solution as well. “GM Audio has installed Auro 11.1 at more than 10 cinemas so far,” a GM Audio spokesman said. “In many cases the original layer of speakers can be reused and the additional surround speakers can be wired in groups instead of independently. As a result, the additional cost is kept low while, at the same time, reflective sounds can resonate in a bigger area of the auditorium. Furthermore, the added height and overhead layers enable sound mixers to move objects around in space, thus creating a lifelike acoustic experience.”