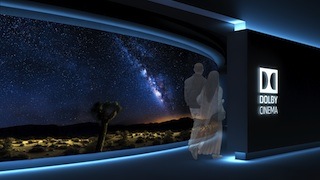 The first Dolby Cinema sites will be located at the newly constructed JT Cinemas complex in Eindhoven, Netherlands, and the UCI/Cinesa La Maquinista complex in Barcelona, Spain. Additional exhibitor partners will be announced as installation plans are completed.

“Dolby has applied decades of research and development to deliver a sight and sound experience to Dolby Cinema that will transport audiences into the story like never before,” said Kevin Yeaman, president and CEO, Dolby Laboratories. “Dolby Cinema will be the most engaging way for moviegoers to watch the newest releases.”

Dolby Vision content will be available in 2015, coinciding with the deployment of the first Dolby Vision projection systems in Dolby Cinema locations.

The newly constructed JT Eindhoven cineplex in the Netherlands, opening this month, will be among the first Dolby Cinema locations to install a Dolby Vision projector. The Dolby Cinema will also deliver a combination of Dolby Atmos sound and Christie Vive audio speakers and Class D amplifiers, many of which were specially designed for this demanding application.

“Dolby Cinema lets studios and exhibitors focus on what they do best, with the confidence that Dolby will deliver a premium experience that makes the most of the latest cinema technologies,” said Doug Darrow, senior vice president, cinema, Dolby Laboratories. “To get this right, we naturally went to a leader in projection that could help deliver a breakthrough solution, and I’m pleased that we were able to work with Christie to co-develop the Dolby Vision projection system. With this announcement, we are confident that exhibitors and studios will now have the ultimate venue to present movies that will keep audiences coming back for more.” 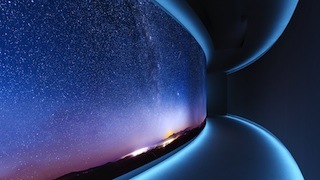 “Cinema projection does not get any better than this,” said Don Shaw, senior director, product management, Christie. “We have combined the research and engineering resources of two of the most innovative companies in the world to create the best projection system that anyone has yet seen. We’ll be delivering audiences a richer, more detailed viewing experience with up to 14 foot lamberts onscreen in 3D and up to 31 foot lamberts for 2D Dolby Vision content, far exceeding any ‘ultra-bright’ industry standards, to all Dolby Cinema locations.”

Dolby Cinema begins with the filmmaker’s vision—using the full storytelling capabilities Dolby offers in image and sound production to transform the way movies are made. Before a movie is played in a Dolby Cinema, audiences will step into an experience designed to deliver the full impact of the filmmaker’s work. Combined with state-of-the-art image, sound, and acoustic capabilities, the movie comes alive to deliver cinema in its purest form.

The design of the cinema itself was created to set a mood and draw audiences deeper into the story. The Dolby Cinema design can be customized to the exhibitors’ needs with a select set of features including a signature entrance and a dynamic audiovisual pathway that provide a new canvas for studio creatives to begin telling their story before the show begins. Additional features may include a wall-to-wall-to-ceiling screen, atmospheric lighting, and faceted acoustic panels designed to enhance the sound quality and heighten the sense of immersion. In addition, all Dolby Cinema locations will undergo a sophisticated visual and acoustic room treatment perfectly tuned for a premium cinematic experience.

The new JT Eindhoven cineplex, opening on December 15, is one of the biggest cinemas of the JT branch and will host eight screens and 1,546 seats. The premiere screen in the new JT Eindhoven complex will be among the first Dolby Cinema installations, equipped with state-of-the-art image, sound, and acoustic capabilities. In addition, the design of the Dolby Cinema in Eindhoven was created to set a mood and draw audiences deeper into the story—while delivering the full impact of the filmmaker’s work. 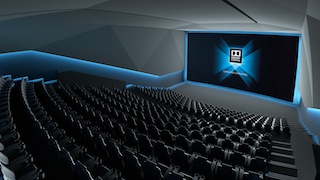 “Dolby Cinema is about presenting a filmmaker’s vision to audiences looking to experience a movie in its purest form, without compromise. Our patrons can be confident that when the movie is played in a Dolby Cinema, it will be exactly as the filmmaker envisioned,” explained Ron Sterk, CEO, JT Bioscopen. “This branded premium cinema concept by Dolby is a big step for the industry, and we are proud to be the first cinema in the Netherlands with a Dolby Cinema in its complex. We are convinced that Eindhoven, known as ‘the city of the future,’ is a logical place for this introduction.”

The new Dolby Cinema at JT Eindhoven will greet visitors with a signature entrance, indicating to them that they are about to experience something truly different. As they cross this threshold, visitors will be guided along a dynamic audiovisual pathway that builds anticipation for the movie as they enter the auditorium. This path provides a new canvas for studio creatives to begin telling their story with a unique image and sound experience before the show begins.

As audiences enter into the Dolby Cinema auditorium, they will be met with a wall-to-wall-to-ceiling screen with atmospheric lighting softly edging the screen and aisles. Wrapping and folding across the walls and ceilings of the room are faceted acoustic panels uniquely designed to hide the speakers placed around the auditorium to eliminate distraction, enhance sound quality, and heighten the sense of immersion.

The Dolby Cinema has undergone sophisticated visual and acoustic room treatments that have been tuned for a premium cinematic experience. Materials, acoustic performance, and seats carefully positioned to provide optimal viewing angles have all been thoughtfully specified to bring the audience into the experience, ensuring that each movie is seen and heard as its creators intended to deliver the full impact of the story.

“With Dolby Cinema, moviegoers will be captivated by Dolby’s state-of-the-art audio and imaging technologies, its thoughtful cinema design, and its well-known brand that has become synonymous with a premium cinema experience,” said Darrow. “As audiences watch the credits roll in a Dolby Cinema, they will realize the most powerful way to experience movies is in Dolby.”

The new JT Eindhoven cineplex will host eight screens and 1,546 seats. In addition to the Dolby Cinema premiere screen, the Cineplex is equipped with two Dolby Atmos screens, a 50-seat private screen, and limited VIP seating in all the additional screens.