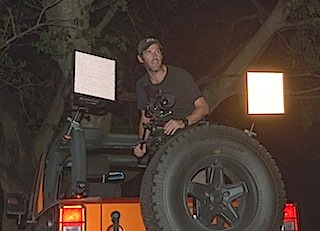 When Florida-based director/cinematographer, John Deeb isn’t shooting spots for high-profile clients such as Hard Rock Hotels or Disney, he likes to expand the limits of his creativity with music videos like a recent one for indie rocker Matt Pond. To shoot Love to Get Used, a song off Pond’s new album, The Lives Inside the Lines in Your Hand, Deeb got to experiment with different techniques not always viable on commercial productions.

“When you are going for the unusual, you have to make sure that your camera and lighting package can handle whatever you want to create,” he says. About 75 percent of this video was shot with a Sony FS700 at 240/480 fps, while underwater elements were done with DSLRs in underwater housings. “This music piece really put our two Litepanels 1x1 Bi-Colors to the test.”

Deeb had a few challenging setups where Litepanels were key to capturing the images he wanted. “For one we needed a shot of Matt running down the road while a large box truck chases behind him,” Deeb recalls. “We needed to be able to balance out the lighting with what the headlights were throwing out. And, everything had to be lightweight and mobile.” His solution was to attach a Litepanels 1x1 Bi-Color to the rear of a Jeep Wrangler and shoot out the back. “We used an Anton/Bauer battery attached to the panel so we didn’t have to worry about cables,” he adds.

In another situation, Deeb found Litepanels the best choice while shooting Pond inside the box truck with the door open as the truck drives around the city. “Again, we needed a way to rig a light in the corner of that truck and be able to dial in the output to match the intensity of the outside lighting,” he says. “We shot at 3 or 4 fps, to get that slow shutter light trail effect.”

Much of the location is a swamp in Florida. “Another tricky spot for power,” he says. “That’s where Litepanels with battery power are great for us. We used the two Litepanels here, and when we couldn’t mount them, we often had crew running back with the action, holding the lights just off camera.”

This isn’t the first time Deeb has used Litepanels. A job for Hard Rock Hotels last year sold him on the lights. “We traveled to three countries and shot at many properties so we needed a lighting solution that was small, mobile and produced soft, flattering light. We rented Litepanels and as soon as we were done, I bought 1x1 Bi-Colors and won’t do a shoot without them now. We’ve had shots in escalators where we had someone handholding the light a few feet away from the talent. We’ve been out of the country where you never really know what kind of gear is going to show up. Having Litepanels with me gives me peace of mind. And, add to it that the ability to dial the color and intensity right on the light or via DMX— makes them invaluable. Especially, today, with all the great cameras out there with such high ISO sensitivity, the Litepanels are perfect to supplement the ambient light on our subjects.”

Deeb is an Addy/Tele and Cannes Young Line award-winning director. Deeb was recently nominated for an Emmy Award for an Atlanta Braves spot. His recent video for Matt Pond’s Love to Get Used can be seen both on television and online. A second Matt Pond video will be released in a few months.