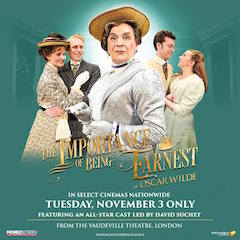 Last week’s live performance of Oscar Wilde's The Importance Of Being Earnest from the Vaudeville Theatre in London's West End to 460 cinemas in 11 territories across Europe achieved a gross box office of £508,041, according to Rentrak. Broadcast by More2Screen and produced by Kim Poster and Nica Burns, the live cinema event across 372 sites in the UK had the highest opening week gross for any commercial West End theatre production screened in cinemas and the second highest-grossing feature on the night, outsold only by The Martian.

The Importance Of Being Earnest stars the highly regarded actor, and TV's Poirot, David Suchet in the role of Lady Bracknell, supported by a stellar cast. This production has attracted rave reviews during its West End run at the Vaudeville Theatre and everyone involved was delighted to share it with theatre-lovers all over the UK, Ireland and selected European territories. The live broadcast included interviews with Suchet and the play's director Adrian Noble, filmed exclusively for the cinema event and captured by Serpent Productions.

Christine Costello, managing director, More2Screen said, "From the moment we announced this release back in March we've had a fantastic reaction from our cinema partners and their audiences. This shows just what an appetite there is beyond the West End for such classic and entertaining plays. For a commercial West End theatre event to deliver Gross Box Office
in excess of £508,041 is a significant achievement and we'd like to thank everyone involved for their commitment in bringing this wonderful production of The Importance Of Being Earnest to the big screen."

The recorded release of The Importance Of Being Earnest cinema event will roll out internationally in November 2015 when it screens in cinemas across the US, followed by Canada in December and Australia in 6 February.