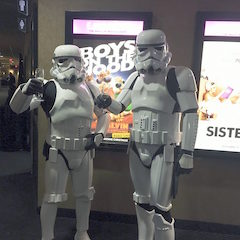 Later this month Emagine Entertainment will unveil its Super EMAX theatre, which features a 92 feet wide by more than 48 feet tall screen. The company says it is the largest movie screen in the State of Michigan. Located at Emagine’s Novi location, the theatre’s grand opening will take place December 15 with the first showing of Star Wars: The Last Jedi.

Emagine’s theatre in Novi was the company’s first foray into metropolitan Detroit when it opened in October 2002.  The owners have invested more than five million dollars to renovate and refresh the theatre throughout, including the introduction of the new Super EMAX screen.

The venue’s revitalization features amenities throughout including 1,400 powered reclining chairs separated by a spacious seven feet of row spacing, sight lines that have been computer modeled to ensure every seat in the venue has ideal views, upscale décor throughout, an enlarged E-Bar sit-down bar, new restrooms, new ticketing counters, soft seating areas, and a new concession menu featuring expanded food choices.  Modeled after the success of its recently remodeled venues in Canton and Birch Run, Emagine Novi has been transformed into an ultra-luxury theatre. 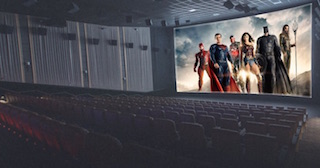 . With the opening of its Super EMAX, Emagine is introducing another innovation to the Michigan market: Christie 4K RGB laser imagery. It will be paired with a 64-channel Dolby Atmos immersive audio system and further enhanced with a QSC Core 110f, a multipurpose software-based digital audio signal processor that delivers the benefits of QSC’s Q-SYS solution. Used in conjunction with QSC’s DPA-Q Series amplifiers and SR Series surround loudspeakers, the Core 110f provides bass management for low frequency content in all of the Dolby Atmos  surround channels.

Bass management combines the low frequency sound content that is directed to the surround speakers and sends it instead to special surround subwoofers. The Core 110f also provides Intrinsic Correction, which is special QSC laboratory-derived sound processing that guarantees optimal performance from any QSC loudspeaker. The combination of the aforementioned technology should create the most awe-inspiring movie experience in the Midwest.