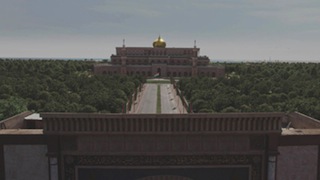 Tyrant, FX’s new drama produced by Fox 21, tells the story of an unassuming American family drawn into the inner workings of a turbulent Middle Eastern nation, a fictional country Encore VFX helped realize through exotic set extensions, extravagant computer-generated palaces and city skylines, subtle environmental work and crowd duplication. On site in Morocco, where the pilot was shot last fall, Encore VFX supervisor Doug Ludwig worked closely with the show’s production designer and art director to scout locations that conveyed the appropriate level of opulence, which were then further enhanced with VFX.

“Though the country is fictional, it needed to feel plausible and we couldn’t rely on stock footage. Furthermore, audiences have come to expect a high level of VFX for broadcast so we definitely had a tall order,” explained Ludwig. “Morocco is rich with amazing landscapes and architecture, which inspired us to create a lavish presidential residence and grounds to rival some of the world’s most decadent estates in size and scope. We did this by integrating VFX with practical elements from various structures and landmarks to deliver a unified design.”

The massive scale of the royal compound is first revealed in the pilot during a 30-second aerial shot, which is about 85 percent CG. Filmed with a drone carrying a Red camera, practical footage was replaced with 3D models and matte paintings by Encore, a Deluxe Entertainment Services company. In total, Encore delivered more than 190 VFX shots for the pilot, wrapping in late 2013.

Once FX officially approved the series, production relocated to Tel Aviv, with Ludwig on site for five weeks beginning this past April to oversee the local VFX department. Since the general aesthetics of Israel and Morocco are vastly different, Ludwig and team explored new locations for practical exterior shots, while production completed new sound stages for the palace interiors and courtyard. 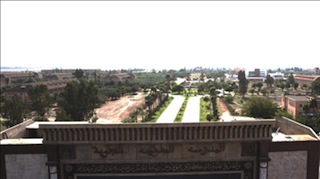 “We’re able to deliver big week after week by working smart,” Ludwig said. “We make the most of our assets by constructing them to be reusable for different times of day and at high fidelity for close ups or pans. I’m in close contact with the producers so we can anticipate what’s coming down the pipe and prepare accordingly. The whole collaboration has been extremely open and smooth, especially considering the location variables.”