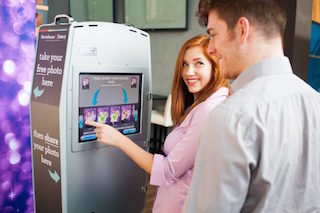 Moviehouse and Eatery, a Texas exhibitor whose theatres feature wall-to-wall screens, plush recliners and a full-service kitchen and bar with a chef-prepared menu, had a challenge: they wanted to build a social media presence to harness their existing clients’ experience and leverage the engagement to further their overall marketing efforts. In May 2015 M&E engaged Social Flash Media, a local Austin, Texas company to dramatically improve their social presence by way of their existing clientele.  SFM has created what the company says is the first unattended marketing social photo station powering a diverse social marketing pipeline.

SFM’s system is simple to use and setup and ever changing campaigns can be managed remotely. That removes the burden to the staff and management on the ground level. The photo station allows patrons to take and share photos at their leisure and expand engagement via email, Facebook, Twitter, and other social media platforms.

The results exceeded M&E marketing director Amy Dial’s expectations. “We could have never anticipated the success that partnering with SFM would be for our brand,” she said. “Through this system we have been able to touch our guests outside of the building, and also get in front of their friends and family, many of which have never heard of us before engaging us via SFM.  We’ve given our brand a life outside of our four walls.”

Dial continued, “Guests love to get in front of the camera, see how fantastic their pictures look (and they do look great), and are eager to share them online. That part has been a huge success. But what happens after that has been just amazing. Once those images are online, people quickly start engaging with our brand by simply engaging their own friends and family. They’re taking notice of their great pictures and the next thing you know, we have clicks to our website and social media sites that we would have never been able to get using our usual targeting methods.” 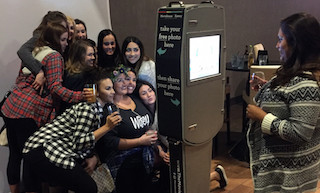 A more detailed look at the effort shows how the SFM system works and what M&E accomplished with it.

This is a very impressive figure as can be seen as driving new traffic to a website is often most difficult. The most impressive data is that the average SFM driven web traffic remained on the M&E website 1:19 seconds compared to 0:52 seconds for all other M&E Austin traffic that includes existing ticket buyers.

When asked after exiting if patrons used the photo booth, those that did not use the system most often replied, “I did not see a free photo booth.” Inflow traffic (prior to their movie) was more gradual and appeared to create longer sessions with more photos. Exit traffic was very rapid and appeared to create shorter sessions with greater lines and were more likely to use signs as props to associate with movies (when available).

The M&E management found the system to be a positive experience for the customers.  Other employees made additional comments such as “there are always people over there having a good time” and “guests love that thing.” 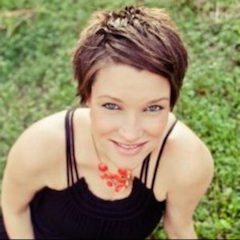 There was a direct relationship to ticket sales versus engagement. The ratio was not linear as one system could not handle the large spikes in foot traffic. For brief periods of time the system would reach capacity taking in excess of eight photos per minute. During high traffic times it was our observation that people generally held their sessions to fewer photos to allow other people waiting to get a turn. SFM found that the longest guests would wait was 4-5 minutes. It was common for people willing to wait 2-3 minutes for their session.

“The numbers have been staggering,” said Dial. “When we started to see the potential of these systems, we also started to see where we could leverage them even further. We added a newsletter opt-in option that is showing great returns. We have played around with props and campaigns that are showing us that guests want to engage with our brand and the more fun it is, the more they want to get involved.  And the systems are mindlessly easy to use. No matter the age or technical awareness, nobody has a problem figuring out how to use the system, and it only takes a minute.

“One of the most valuable parts of our relationship is SFM’s ability to give me reporting that shows exactly how well these systems are working for us,” she said. “Unlike so many other marketing avenues, we can see how effective our campaigns are and refine them as needed to make them even more potent. The campaign management system is easy to use and updates in real time. We can make a decision to change a campaign on a Friday afternoon before we get busy and by the time the rush starts, we’re already running fresh content. The very few technical issues we have had have been dealt with in literal minutes and often before we are even aware of them.”

As a result of the test, M&E allocated marketing budget for each of their three operational theatres in the Austin and Dallas/Fort Worth areas and are actively utilizing the SFM systems.