Every Thing Will Be Fine Finished on Mistika at Arri Mitte 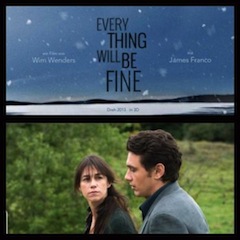 Wim Wenders' production company Neue Road Movies entrusted online artist Christian Tröger and SGO's Mistika at Arri Mitte to complete the post-production of Every Thing Will Be Fine. The film celebrates its World Première in the Official Selection at the 65th Berlin International Film Festival this week. It was produced by Gian-Piero Ringel with DP Benoît Debie, and director of stereography, Joséphine Derobe. Director Wim Wenders was also nominated for three Oscar Awards for Buena Vista Social Club, PINA and The Salt of the Earth.

Tröger is a key member of the creative team at Arri Mitte's state-of-the-art facility, in the heart of Berlin. He chose Mistika to perform the online, conform, depth grading, finishing and subtitling in the film. The solid relationship that exists between Neue Road Movies and the team at ARRI Mitte dates back to 2008, when they worked together on high-profile films such as Palermo Shooting, PINA, and most recently, all six episodes of Cathedrals of Culture.

“Mistika has established a successful track record which has made a lasting impression on our clients. The system played a central role in the post-production of many complex film projects, and always served as the main hub for each department. Aware of how incredibly reliable and powerful the Mistika is from previous experience, it was great when Neue Road Movies approached us to do it all over again for Every Thing Will Be Fine," said Tröger.

“Mistika was an asset at every stage of the project. It handled the native camera formats and was involved in overcoming challenges throughout the entire post process for the 2K-S3D delivery,” Tröger said. “Mistika's efficiency and speed enabled the team at ARRI Mitte to expediently execute the depth-grade at the same time as the colour grade, in two separate suites and dedicated artists. This also had a unifying effect by including the DP, director and stereographer into the post-production process and enabling the completion of the project's final stages to take place collaboratively.”

Tröger said, “Our Mistika-driven workflow ensured that the online and conform always led to a perfect stereo timeline which only ever required touching-up color grading-wise, for the final look. The shared pipeline also catered for the VFX department that required perfectly aligned images for precise tracking and roto-scoping tasks. It meant that right from the start, the colorist's source files were adjusted and received directly from the Mistika timelines.” 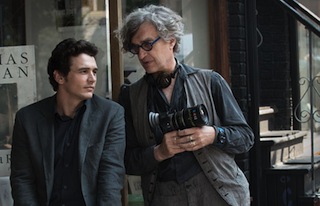 Tröger added, “Step-by-step, the final depth-graded version took form within a 2K-framed scope 16bit file. Mistika perfectly stereo-matched the left and right eye images that were made at earlier stages of the two symbiotic grading sessions. The synergy between the colour and depth grading suites are now part of the standard procedure at Arri Mitte, owing to Mistika's unique capabilities and polished toolset. We have a streamlined process in place here now which is a time-efficient way to work.”

During two weeks of grading, the subtitle versions were then prepared over various shifts in a dedicated Mistika timeline created by using the DCI XMLs.  Wenders and stereographer Derobe were eager to present the subtitled version of the film to the festival in a more creative way. They wanted the subtitles to appear outside of the film's frame. Although it is not a convenient design for distribution purposes, they knew it would work well for a première.

Tröger said, “We conducted a few tests to set-up a scope picture inside a flat DCP, but with very low luminance and within the “letterbox” shape of the film frame itself.” He continues, “Darkening the images helped to eliminate “ghosting” and we kept the image as clean as when it had first originally been shot by the DP. I then finished the scope and continued working with the finals in the prepared subtitle environment, which retained all the metadata, leading to a flat derivative with subs. We then spent an additional session concentrating fully on defining the detailed depth of each sub for the final stereoscopic version. This formed the foundation template from which all of the other language versions were to proceed from later on."

Another great advantage of having Mistika on board was that both the director and stereographer could quite comfortably focus on their own specific areas at their own convenience. Mistika's immediacy, speed and real-time capacity, along with its batch render, played a crucial role in making this a reality.

“It literally took us a matter of minutes to combine their respective depth and color grading work for prompt viewing on a big screen at our in-house theatre,” said Tröger. “We called them On-Demand Screening Sessions and they were designed to be delivered on impulse and as often as the client required for their visual ease which Mistika smoothly facilitated.”

Tröger said, “It was a great opportunity for our clients to address and analyze various elements in the dedicated sessions, and always in regard of one another. They were able to see what a decision about contrasts in the color-timing session would look like, for example, combined with a certain depth budget defined at the same time in the other suite. Another illustration was how the VFX and depth of a certain scene would come across with a different look, and so forth. This coefficient workflow was down to Mistika's flexibility and would not have been possible if the software was not able to connect openly with our existing technology and communication modes that most modern post facilities like ours comes with."

Derobe said, “As a stereographer, I have worked with a variety of companies in Europe that use Mistika. I believe in SGO's remarkable technology and admire its accuracy, versatility and beautiful toolset, that provides me with a plethora of options to choose from in order to deliver a truly great picture with sheen, even after filming has taken place.”

Tröger and the team at Arri Mitte achieved exceptionally high quality results and met the tight deadlines and high-level demands with coordinated professionalism that an international feature film involves. Tröger said, “As a Mistika operator, I have the confidence that I can deliver uncompromising image quality perfection of the highest standards to our clients - producers and creatives on all of our projects. I can therefore conclude by echoing this specific film title, that Everything Was Absolutely Fine with Mistika at Arri Mitte and the production team was very pleased with the results.”

Every Thing Will Be Fine is based on a script written by Bjørn Olaf Johannessen, which portrays a traumatized writer's life-changing struggle to make sense of what happened after accidentally running over and killing a child. It will be released in cinema theatres on April 2.