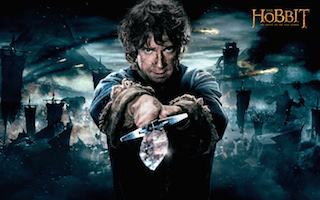 The digital cinema rollout brought cinemas everywhere to a uniform technology, for the first time in generations, and perhaps for the last time ever. This one-time event is often celebrated as the new norm. But in truth, it is anything but normal. Consider the distribution challenges of just one movie – last year’s The Hobbit: The Battle of the Five Armies – and you’ll begin to understand what I mean. Diversity is already returning to the cinema footprint. To best live with it, we need better tools to manage it. To do that, we need to fix the digital cinema package.

SMPTE DCP has become the poster child for the industry’s inadequate ability to manage change. Following its introduction in 2009, here we are in 2015, still absorbed in discussion over how to accomplish the transition. Less than one percent of distributions around the world use any version of the format (of which there are several to choose from). But the failure to roll out change is not a failure of exhibitors to upgrade, as is commonly portrayed. It is a failure to efficiently manage diversity at the distribution level, including the diversity that manifests when some systems are upgraded and others are not. It’s time to change course.

The transition to SMPTE DCP has posed a particularly difficult challenge, caused by a web of complex and overlapping issues in distribution and exhibition. For some cinemas, SMPTE DCP-compliant distributions will actually be less functional than those using Interop DCP. There are compatibility issues with subtitles and audio, which in many cases can only be remedied by replacing the equipment. Simply updating software is not always a fix.

If the equipment was purchased through a virtual print fee program, replacement of the equipment, which could cost upwards of $50,000 per screen, may not be a near-term option. The equipment itself may be the underlying asset of a security that won’t mature for several more years. Even if replacement were possible, what would motivate the replacement of a productive asset? For exhibitors, investment in infrastructure upgrade makes sense when the audience connects to the improvement, such as better seats. The only people who connect to the improvements in SMPTE DCP are techies.

Where equipment was purchased outside of a VPF program, there is no enforcement mechanism in place to facilitate the upgrade to DCI compliance. A distributor could ask an exhibitor to upgrade such systems, but this will quickly become a negotiation as to who pays. After all, the exhibitor already invested out-of-pocket in digital projection equipment, and is already receiving movies. It’s not a simple situation to change, as no one distributor is eager to pay for an upgrade that could benefit a competitor. 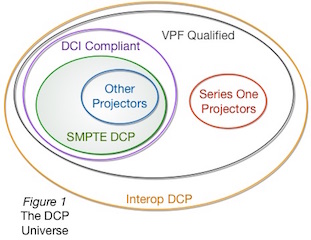 The reason for zooming in on DCI compliance is that without a 100 percent DCI compliant footprint around the world, there is no guarantee that all systems can read the basic elements of a SMPTE DCP. With so many hurdles to cross, the path of least resistance for a worldwide upgrade to SMPTE DCP is to wait for older systems to be retired from service. This typically means the replacement of a type of projector called Series One, although it’s not the only barrier in the way of a transition. The path of least resistance requires a long wait, suggesting that Interop DCP will remain in use for a long time.

If all of this sounds confusing, then Figure 1 will confirm why. There are many variables involved in the transition to SMPTE DCP, with intricate relationships that are not immediately obvious. While all of the attention goes to SMPTE DCP, the universe for Interop DCP is the only one that is all encompassing.

Even if we were able to rollout SMPTE DCP content today, the transition to new technologies, and the upgrades that come with it, will not end there. Consider the eventual emergence of higher compressed image bit rates from that which DCI now specifies. The Hobbit: The Battle of the Five Armies in high frame rate 3D already went down the path of using a higher bit rate to reduce the amount of compression applied. It was a necessary step to preserve the quality of the HFR image, but it limited the footprint of cinemas that could play it. There are bound to be more movies like it. In addition, we have higher-dynamic-range picture and object-based audio to look forward to. Change is inevitable if cinema is to keep up with advances in home and personal entertainment. Diversity across the cinema footprint will be the natural outcome.

The failure of SMPTE DCP to take root provides an opportunity to both reassess goals and review the mechanisms in place for managing change. If the goal is to transition the industry to SMPTE DCP, and distributors are willing to engage in dual distribution of Interop and SMPTE DCP, then there is a better path to follow than the one we are on today. Or, if the goal is to implement many of the features of SMPTE DCP in as expedient a manner as possible, while maintaining the one-to-one relationship of DCP to title version, then there is a second path for that. I’ll describe both. Both paths involve a mechanism that I call Track File Prioritization.

Track File Prioritization is a method for managing backwards compatibility in the DCP. Unfortunately, upgrades in technology and backwards compatibility were not considered in our concept for the DCP back in 2001. Instead, the focus was on preserving a one-to-one relationship between DCP and title version. This might best be visualized by thinking of a version of a movie as a film print. Each version of the film print may have a certain language of subtitles, a certain language of sound track, and a particular edit. So it is with the DCP. Each version of DCP can be thought of as mimicking a parallel version of the title as it would be realized in film.

The challenge that SMPTE DCP introduces to distributors is the need to support multiple technology versions of a title. This is in addition to the creative versions of each title that distributors already manage. If a distributor today is faced with 300 DCP versions for worldwide distribution of a major release, then adding SMPTE DCP to the mix potentially doubles the number. Doubling the number of DCPs also doubles the number of key delivery messages and quality control operations on the distribution side, as well as burdens the exhibitor with more DCPs and KDMs to manage and store. 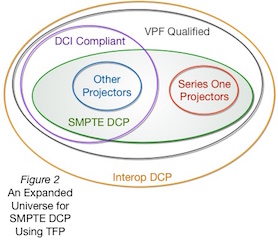 The problem illustrated in Figure 1 is that SMPTE DCP, as designed today, only addresses a select portion of the universe of installations. If SMPTE DCP were to become backwards compatible with Interop DCP, so as to, let’s say, include Series One projectors, it would address a larger portion of the installation universe, as shown in Figure 2.

Track File Prioritization works by carrying multiple technologies of a content essence type, such as a subtitle, in a single DCP. Multiple technologies of subtitle exist because Interop DCP and SMPTE DCP do not use the same format, and not all equipment can read SMPTE subtitles. Fixing this can require the complete replacement of a projector, an expensive proposition. With TFP, the playback system is configured to determine the prioritization, or selection, of the best track file that matches the equipment’s capability.

Subtitles serve as a good example for illustrating how TFP works. However, TFP is not limited to subtitles, and can be applied in other ways that will not be explored here.

This is where I jump into a bit more technology. (Feel free to skip this paragraph.) For completeness, I’ll describe how TPF is best implemented while maintaining backwards compatibility. It is possible to introduce new asset type descriptors to the DCP for TFP track files. (Asset type descriptors are used to identify track files in the Composition Playlist.) SMPTE rules require systems to ignore asset descriptors not recognized, so non-upgraded systems that don’t know what to do with TFP asset identifiers will simply ignore them and play the main track files, as would happen without TFP. Of course, TFP requires an upgrade to SMPTE DCP, but that’s simply a matter of standing in line. There is SMPTE DCP 2009, SMPTE DCP 2011, SMPTE DCP 2013, and we may be on track to produce SMPTE DCP 2015. SMPTE DCP will continue to evolve, and TFP will accelerate the rollout of newer versions and features.

Introducing backwards compatibility to SMPTE DCP, however, may not be enough to satisfy distributors. There remain those pesky systems hidden in dark corners that are incapable of reading the basic elements of SMPTE DCP. If there is concern for this, then the best means to introduce newer features of SMPTE DCP into distribution is through a TFP version of Interop DCP. There are two goals of this approach: backwards compatibility with non-upgraded Interop-compliant systems, and preservation of the one-to-one relationship between DCP and title version. Of course, this requires the formalization and improvement of Interop DCP, not the most popular thing to do, given the massive effort in place to bury its existence. (Even without TFP, formalization of Interop DCP is the right thing to do, as explained in the earlier article What’s Wrong With The DCP?)

TFP allows distributors to put new standards to work immediately by introducing backwards compatibility. This is a plus, as the immediacy of availability will do a better job of encouraging system upgrades than what we do today. Currently, manufacturers and exhibitors are pushed to upgrade, and then told to wait, sometimes years, before being rewarded with content that actually puts the upgrade to work. If we want to reward manufacturers and exhibitors for upgrading, then we need a mechanism that enables rapid introduction of content that utilizes the upgrade.

Diversity in cinema systems is a rule, not an exception. The number of DCP versions that distributors must produce is growing. There will be no end to technology improvements, which threaten to further multiply the DCP count. We are already in year six of a lackluster transition to SMPTE DCP, which if nothing else, has underscored the need for better tools to manage technology change. The addition of Track File Prioritization to the DCP will give the industry a much better tool for managing diversity across cinemas, and a better mechanism for moving to SMTPE DCP in distribution.

Michael Karagosian is the president of MKPE Consulting LLC, specializing in business development and intellectual property for entertainment technologies.  His company website is at http://www.mkpe.com.