Foxed to have Canadian Premiere June 28 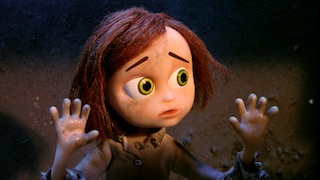 Foxed, an award-winning, 3D animated short by Toronto-based director James Stewart will have its Canadian 3D premiere and theatrical run in Toronto at the TIFF Bell Lightbox, starting June 28. The stop motion animated short will screen in front of the feature documentary, Storm Surfer’s 3D, as part of TIFF’s summer program line-up.

Beware of what hides behind the mirror. The menacing 3D, stop-motion world of Foxed reveals young Emily toiling in the mines beneath her house, imprisoned by foxes who have duped her entire town into believing children can be replaced. Emily has to grow up quickly if she is to escape and outwit the foxes at their own game. But her daring attempt to get away is met by a stunning encounter above the ground that leaves her lost and confused. Enthusiastically received at international film festivals in Stuttgart, San Francisco, Annecy, and Sarasota, Foxed is a darkly humorous tale about growing up in an environment of parental control in which children are often misrepresented in the eyes of their parents.

Foxed is co-directed and produced by digital 3D filmmaker James Stewart whose credits include the 3D work for Werner Herzog’s acclaimed Cave of Forgotten Dreams. As the head of Toronto-based Geneva Film, Stewart is one of the world’s foremost experts on the subject. His short film Foxed, which recently won the Best Animated Film Award at the Yorkton Film Festival is currently being developed into a full-length feature film by Geneva Film.

Crafting a Mood: behind the scenes of Foxed