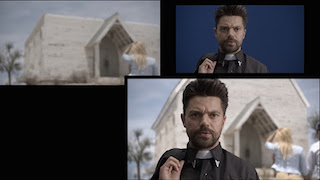 Visual effects production for the first season of AMC’s drama Preacher is in high gear at FuseFX, Los Angeles, as artists work to enhance the series’ ample servings of supernatural mayhem. The pilot episode alone featured more than 250 VFX shots with a high degree of integration that achieves a seamless marriage between the practical photography and the digital effects.

One recurring effect is Custer’s faded white clapboard church. The church featured in the pilot was built on location in Estancia, New Mexico and was a rectangular partial set with two finished sides and no roof or steeple. FuseFX artists created the roof and steeple (which was spatially offset to left side of the roof rather than in the traditional center position) as a CG asset and it was composited into some 20 shots. After the series was green-lit, the church was re-imagined to look more like the one featured in the original comics and required no CG augmentation. It was built to scale on location on New Mexico State land behind Albuquerque Studios.

“But the new church meant, for continuity’s sake, that the building in the pilot had to be replaced,” Lingenfelser notes. “Over the course of numerous trips to Albuquerque, I was able to take hi-res still images of the new church, taking into consideration the necessary angles and lighting required to composite them over the church in the pilot.”

A co-production of Sony Pictures Television and AMC Studios, Preacher is based on the popular 1990s Vertigo/DC Comics comic book series (created by writer Garth Ennis and artist Steve Dillon) and was developed for television by Seth Rogen and Evan Goldberg (This Is the End, Superbad, Neighbors) and show-runner Sam Catlin (Breaking Bad). 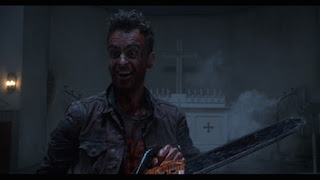 The series follows a Texas preacher named Jessie Custer who is inhabited by a mysterious entity called Genesis that gives him the power to make people do whatever he commands. Once this power attracts the attention of two mysterious angels, Fiore and DeBlanc, Jesse, his badass ex-girlfriend Tulip, and an Irish vampire named Cassidy are thrust into a crazy world populated by a cast of characters from Heaven, Hell and everywhere in between.

Lingenfelser explains his passion for the project by noting that he has been anxiously waiting for Preacher to come to the screen since the comic first published in 1995. “I’m a huge fan,” he says. “When I learned that Evan Goldberg, Seth Rogen and Sam Catlin were turning it into a television series, I knew I had to be part of it.”

Preacher includes a large number and variety of visual effects shots, and while many are complex, few are obvious.  Many of the shots span hundreds and hundreds of frames, which for TV is an eternity.  For the pilot, FuseFX’s task list included a lengthy fight scene—carried on with spears, knives, swords, crossbows and golf clubs—in the cabin of a Learjet. Digital elements included flames, breaking glass, penetration wounds and lots of blood. 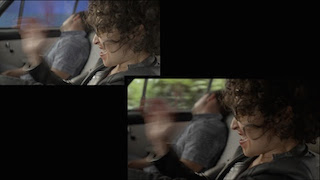 “The scene was shot without a single drop of blood during the fight,” notes Lingenfelser.  “All the contact hits had to be sold through a very tedious compositing process using existing practical blood elements. We also added CG crossbow bolts, a spear, a machete blade and a champagne bottle put to unique use.”

“At the same time, we added sky with moving atmosphere outside the windows to show the direction of flight,” he adds, “all the while going from the dead of night to full sunrise over the course of 66 cuts.”

The pilot included a second fight inside Tulip’s Chevelle racing through a cornfield.  The cornfield scene was shot in Holtsville, California and doubled as Kansas once the palm trees and other anachronistic flora were digitally removed and replaced with a CG cornfield in a sweeping drone aerial.  Background plates were shot using a wasp camera rig mounted on the hood of a Hummer. Five camera heads provided a full 270-degree field of view as the Hummer plowed through the cornfield in several passes.  Those were than stitched together and composited over blue-screen plates of the actors fighting in the backseat of the Chevelle.

The pilot’s opening sequence was implemented as a fully digital sequence and was produced in its entirety by the FuseFX team. It is a view from space of a comet that is the source of Custer’s otherworldly powers, which careens through the solar system and passes through the rings of Saturn before crashing into central Africa.

Lingenfelser explains that the sequence is meant to recall science fiction films of a bygone era. “It’s an interesting combination of a retro look with a complex effects simulation,” Lingenfelser explains. “We created the rings of Saturn as well as the debris that explodes when the comet punches through. It’s a fun sequence.”

For the most part, FuseFX is focused on creating effects that are meant to improve scenes without drawing attention to themselves. “If the visual effects are invisible to the audience, that’s fine by me,” Lingenfelser says. “Everything we do is done to serve the story. If we keep viewers’ attention on what’s happening to the characters, we’ve done our job.”