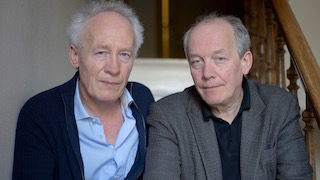 The Belgian brothers Jean-Pierre and Luc Dardenne, who twice received The Palme d'Or, are being awarded the Honorary Dragon Award at the 40th Göteborg Film Festival.

Respectively born 1951 and 1954 in Belgium, Jean-Pierre and Luc Dardenne are behind some of the century’s most powerful films, such as The Child, The Son and The Kid with a Bike. They began making film together at the end of the seventies and broke through internationally in the nineties with The Promise. In 1999 they received their first Palme d'Or at Cannes for Rosetta. Their second Palme d'Or came six years later with The Child, positioning them in a small, exclusive group.

“The Dardenne brothers may be the most influential filmmakers of the last twenty years. Their emblematic fusion of stark social realism, sublime drama and resolute loyalty towards society’s vulnerable members has shaped the style of a whole generation of filmmakers and evoked some of the foremost works of modern film history,” said Jonas Homberg, artistic direct of the festival.

Their new film, The Unknown Girl, stars Adèle Haenel and tells the story of a young general practitioner, Jenny. She feels guilty for not having opened the door of her practice to a girl who is found dead shortly after. The film will see its Swedish premiere at the festival.

A retrospective will also be shown at the festival, including some of the Dardenne brothers’ most-loved films. The audience will also have the opportunity to discover their early, rarely screened documentaries.

Jean-Pierre and Luc Dardenne will be visiting Göteborg Film Festival February 4-5. They will receive the distinction at the Dragon Award ceremony on February 4.

TriArt Film is the distributor of The Unknown Girl in Sweden.

The 40th Göteborg Film Festival will take place from January 27 to February 6, 2017.