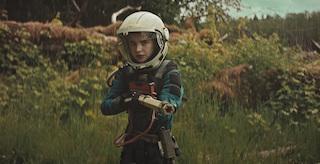 Post-production finishing for Prospect, the acclaimed feature debut from directors Zeek Earl and Christopher Caldwell, was completed at Umedia in Vancouver. The film, which is co-produced by Depth of Field, The Realm and Ground Control and had its world premiere this month at SXSW, has drawn rave reviews for its genre-bending tale of a teenage girl and her father who travel to a remote, toxic planet in search of riches.

Prospect presents a contrast to most sci-fi adventures. There are no glittering cities, gleaming spacecraft or dazzling tech. Instead, its characters pilot a creaky vessel and wear second-hand spacesuits. The planet they visit is a dank tangle of towering trees and other foliage, less like Mars, than the rainforests of Washington State that Earl and Caldwell call home.

Umedia supervising colorist Andrea Chlebak who worked directly with the two directors in applying the final color grade, says that while the film is set in the future, its roots are in classic cinema. “Stylistically, Prospect is like a Western in the storytelling, the way the characters speak, the kind of interactions that they have and the overall narrative arc,” she says, adding that the filmmakers cited the Coen Brothers’ True Grit as a major influence.

Chlebak collaborated with Earl and Caldwell to develop a look that encapsulates the story’s blend of old and future. The color palette has a warm bias that suggests frontier times and underscores the omnipresent sense of menace. Textural elements within the frame are accentuated to create a filmic feel. It’s eerily beautiful. “Zeek and Chris wanted to take cues from photographic prints,” Chlebak recalls. “Our look book included NASA archival imagery and still nature photography from the 60s and 70s. So we pushed the aesthetic as far as we could in that direction.”

A special challenge was presented by a pinkish dust that swirls in the sky in nearly every scene. Most of the dust elements were shot practically, but separately from the background plates and passed through a visual effects process, before being finally composited live during grading in Chlebak’s Baselight suite. That allowed for better control over the density and rate of flow. 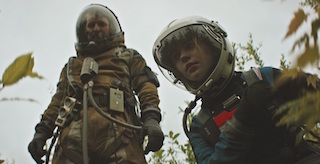 “We needed to control the particles as the characters passed through different parts of the jungle environment,” she explains. “Sometimes, they were in areas where the winds were strong and we needed the dust to appear with greater intensity. Other times, it had to be more peripheral because the scene was quieter or more serene.”

Umedia developed a custom workflow to manage finishing work on the film. Live action was captured using a variety of camera systems at resolutions ranging from 4K to 8K. Chlebak’s Baselight suite was set up to allow her to grade raw files at all resolutions in the same timeline—as well as to incorporate visual effects files arriving from third-party vendors. “We worked natively with the 8K files and mastered in 4K,” Chlebak says. “It took careful organization on our end to manage the process efficiently.”

Post finishing extended over a period of nearly two months as the filmmakers refined the cut and visual effects were completed. Throughout the process, the Umedia team remained enthusiastic as it was apparent Prospect was an exceptional film. “Zeek and Chris built an entirely new world for this film and created an ontology for it, down to the ships, the technology and the tiniest details of art direction,” Chlebak says. “They were intimately involved in every aspect of the filmmaking, including the color grade. It was a pleasure to be part of their collaborative process.”