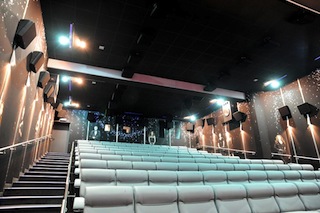 Located in North Rhine-Westphalia, Germany, Mönchengladbach has a history that goes back to the 10th century—but the city’s newly completed movie theater features the latest digital cinema technology. This is particularly true where the sound is concerned. Haus Zoar is Germany’s first cinema to feature a Dolby Atmos Connect interface with Harman’s Crown DCi Series network amplifiers. The cinema has also deployed JBL ScreenArray loudspeakers in an installation that takes surround sound realism to new heights – literally.

Dolby Atmos is a newly developed surround-sound technology that employs any number of overhead speakers as well as traditional side-surround speakers to create an astonishingly realistic three-dimensional sonic environment.

The Haus Zoar system employs three JBL ScreenArray 3732T loudspeakers for the main left, center and right channels. Two JBL 4642A subwoofers are located in the front of the theater and two 3635 18-inch subs are installed at the back of the theater. To deliver the full potential of Dolby Atmos sound, 50 JBL 8350 surround loudspeakers are placed at the sides of the theater and mounted from the left and right of the ceiling and aimed diagonally downward. Its high power handling capability and smooth coverage over a wide area make the 8350 ideally suited for the demanding sonic and technical requirements of Dolby Atmos soundtrack reproduction.

This eliminates the need for digital-to-analog and analog-to-digital conversion and preserves the sonic purity of the original multichannel soundtrack recording. In addition, the Crown DCi Series amplifiers include preset tunings that are optimized for various models and types of JBL loudspeakers, to further optimize the performance of the Haus Zoar system.

“The Dolby CP850 Atmos Cinema processor, the new Crown DCi amplifiers, the large-scale JBL loudspeaker system and the superb acoustics of Haus Zoar all combine to create a remarkable and totally immersive sonic environment in what is surely one of the world’s most extraordinary movie theaters,” he added.