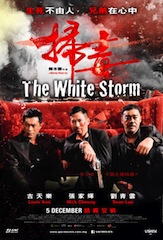 Golden Screen Cinemas, the leading multiplex operator in Malaysia, is the first to install the Dolby Atmos sound platform in Malaysia. The White Storm, directed by one of Hong Kong's most renowned film directors, Benny Chan, and starring prominent Hong Kong actors Louis Koo and Ching Wan Lau was the first Dolby Atmos film to be showcased at the theatre.

"We look forward to offering our audiences the best cinematic audio and visual experiences. This is in line with GSC's ongoing efforts to create new value propositions for discerning moviegoers. We are delighted to be the first exhibitor in Malaysia to introduce the latest groundbreaking audio technology with Dolby Atmos here in GSC 1 Utama Hall 3," said Heng Beng Fatt, deputy general manager, GSC.

"We are honored to be collaborating with Malaysia's leading exhibitor, Golden Screen Cinemas, on this inaugural launch to bring the impressive Dolby Atmos audio experience to moviegoers in Malaysia," said Leong Yan Yoong, regional director, South East Asia, Dolby Laboratories. "Golden Screen Cinema audiences will feel as if they are in the passenger seat during the high-impact chase scenes while experiencing The White Storm in Dolby Atmos."

The forthcoming movies to be screened in Dolby Atmos at GSC this month include The Hobbit: The Desolation of Smaug and The Secret Life of Walter Mitty.

Slated for 2014 movie releases in Dolby Atmos at GSC are I, Frankenstein; 300: Rise of an Empire; Mr. Peabody and Sherman; Rio 2; X-Men: Days of Future Past; and Dawn of the Planet of the Apes.