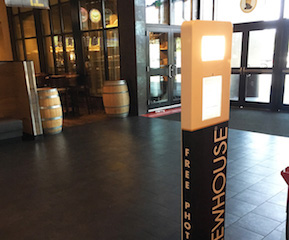 The competition for entertainment dollars is a constant challenge, especially for emerging theatre chains. Finding locations with a high discretionary income and offering a unique experience enables them to compete against larger, more established chains. Flix Brewhouse, for one, is not shy about letting customers boast about the good times they have at their theatres. To achieve its social media goals and grow its customer rewards program, The Circle, the exhibitor turned to Social Flash Media.

The Social Flash Media’s Bantam photo kiosk operating at each Flix Brewhouse location enables customers to take unlimited free photos, send them to their smart phones with marketing assets, and subsequently share them on social media, all while driving clicks and visibility to The Circle rewards program.

With seven nationwide locations and three more opening soon, Flix Brewhouse realized that with growth comes the challenges of maintaining brand awareness in existing markets, developing a loyal following in expansion territories, and delivering a superior experience that lives up to its proclaimed praise. Building their rewards program membership and social media exposure were two crucial elements in their long-term brand development.

Flix Brewhouse director of marketing Greg Johnson recognized that social media marketing has three distinct and necessary components: owned media, paid media, and earned media. Johnson believes that the latter is the most influential, credible, and powerful with today’s consumer, as people consistently rely on endorsements from their friends above all other modes of advertising.  What Social Flash Media delivers fit into the Flix marketing strategy as it leverages owned and paid media and inherently drives earned media through effective storytelling.

“We knew our guests would immediately embrace the Social Flash Media photo booth,” says Johnson, “but after 20,000 photos were taken in the first 60 days there was no question that the addition of the booth to our guest experience was a smashing success.” 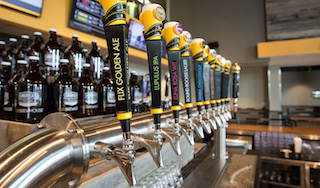 Johnson says the best part of the experience was the sheer number of clicks and interest it drove to The Circle rewards program.

“We quickly proved the platform was a mechanism for turning our guests into outward evangelists for our brand,” he continues. “I’m always hunting for creative tools to engage our guests while at the same time spreading the word about Flix. The level of flexibility and control that we have through Social Flash's platform lets us create an experience with our guests, which has real reach outside our walls. We are always looks for ways to leverage audience networks because one-on-one influence between people that know each other is the strongest form of marketing and our booth is the right tool to do that.”

To increase the audience for the photos, Flix Brewhouse provides rotating creative backdrops with current, real-time movie releases. These engagements include taking and sharing guest photos, posts to social media, clicks to branded customer experience pages, and most importantly, driving awareness and clicks to The Circle rewards program.

The content is authentic, capturing patrons in their experience, and proving to be of interest to the audience.  With the photo kiosks deployed in every theatre, weekly averages of more than 2,300 new customer photos have led to nearly 11,000 branded engagements for Flix Brewhouse. The Social Flash marketing system is capable of injecting content links into the newsfeed, succeeding in trackable click-throughs. 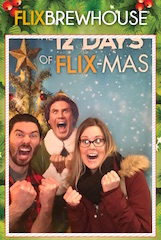 The Bantam kiosk was designed for high traffic and reliably works in an unattended fashion perpetually. Moreover, each Bantam system is remotely assigned promotional content by Social Flash Media’s patented system to assure relevant assets and content are in use at each location.

Consumers are bombarded by thousands of messages every day, making authenticity, trust and credibility questionable. Flix ambassadors are not paid actors/sponsors putting in the good word for compensation. Endorsement-based marketing is difficult to create and even more difficult to track. All of Social Flash Media’s solutions rely on consumer driven action.

Flix Brewhouse is now able to engage with their customers in a dramatic way – both in-theatre and on social media. In the first seven months, customers have taken more than 73,000 photos, which has resulted in more than 20,000 branded copies shared throughout the social spectrum with attached assets. This has led to more than 23,000 engagements derived from Facebook posts – shares, clicks to branded experience pages, and click-throughs to key website pages, such as The Circle Rewards sign-up page.

“We're able to enhance the guest experience by providing fresh, original backdrops when new relevant movies release,” says Johnson. “We see engagement rise when we produce custom artwork for special events like our 12 Days of Flix-mas promotion or our FanFest showings. The platform allows both local and national marketing while still remaining intimate with our customers and their friends.”

“The addition of the Bantam kiosks and the rich analytics has been an huge success for Flix Brewhouse,” he says. “While the booths were added as an afterthought to our seven existing locations, we have incorporated a dedicated space for the booths in our prototype design to really maximize utilization as our national expansion continues.”