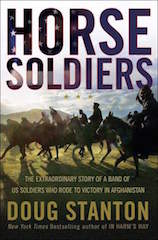 Dolby Laboratories today announced that Warner Bros. Pictures’ Horse Soldiers is the 100th Dolby Cinema title. "Reaching the 100th announced title for Dolby Cinema is a tremendous accomplishment that couldn’t have been achieved without the support from the directors and filmmakers who want to use the best technology for their storytelling,” said Doug Darrow, senior vice president, cinema business group, Dolby Laboratories. “In 2017 we announced 44 Dolby Cinema titles, more than any other premium format, which is a testament to the ongoing commitment from Hollywood and studios around the world to deliver the best experience to the cinema.”

"Dolby Vision and Dolby Atmos are two amazing formats that deliver on the Dolby Cinema experience and provide our filmmakers the ability to showcase their true talents," said Jeff Goldstein, president, domestic distribution, Warner Bros. Pictures. “Dolby Cinema makes you feel as if you are in the movie, and we are proud to be a part of this tremendous milestone."

Horse Soldiers is based on the New York Times best-selling book of the same name by author Doug Stanton. It tells the story of a band of U.S. soldiers who fought on horseback in Afghanistan. The film is set for release in January.

STX Entertainment, Valerian and the City of a Thousand Planets, July 21, 2017