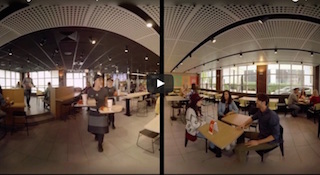 Hula Post, Hollywood, has developed an all-in-one workstation for virtual reality content creation. The workstation features stitching, stabilization, editorial, visual effects, titling, color correction, finishing and playback. It is available for lease on a short-term or long-term basis, and comes with the same 24/7/365 technical support and service that Hula provides for editing systems, media storage and networking projects.

In the first use of the new workstation, Hula Post provided post-production services to the production company, Wonderworld VR, and McDonald’s for a 3D virtual reality experience introducing its new self-service kiosks (now in use at some restaurants in Florida, New York and Southern California).

Hula managed editorial, color correction, titling and finishing for the two-minute piece, titled Building a Better McDonald’s Just for You, which takes viewers on a 360-degree, 3D tour of a restaurant equipped with the new ordering system.

It can be viewed on YouTube or via a mobile phone app.

“Our VR engineers will help you through each step of set-up, production and delivery,” said Moncreiff,  “and our support team will be at the ready, 24/7 should any issues arise.”