I Am Not Madame Bovary Mastered for Dolby Cinema 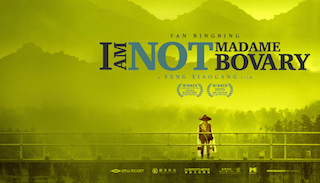 Dolby Laboratories and Beijing Sparkle Roll Media Corporation have announced that Sparkle Roll’s comedy feature I Am Not Madame Bovary, in theatres November 18, will be mastered in Dolby Vision and Dolby Atmos for Dolby Cinema locations in China.

I Am Not Madame Bovary is based on a novel of the same name by award-winning Chinese writer Liu Zhenyun. It tells the story of an ordinary rural woman’s 10-year journey to exonerate herself after she is swindled by her ex-husband. The movie adopts a special round movie frame, with the action seen as though through a telescope, to demonstrate the chaos of the story and provide moviegoers a fresh and distinctive experience.

“I was blown away when I saw the true black, astonishing brightness, incredible contrast, and rich colors enabled by the Dolby Vision laser projection system. That has made Dolby Cinema the place to go to experience I Am Not Madame Bovary with the round movie frame,” said Feng Xiaogang, the widely acclaimed and multiple award-winning film director at the helm of I Am Not Madame Bovary. “I cannot wait for audiences to be truly immersed in the story of the movie with the power of Dolby Cinema.”

“Director Feng Xiaofang was the first Chinese director to adopt Dolby Atmos and now has become one of the first Chinese directors to use Dolby Vision,” said Doug Darrow, senior vice president, cinema business group, Dolby Laboratories. “We are excited to continue to work with director Feng Xiaogang to bring the story of I Am Not Madame Bovary to life in a unique movie frame that fully takes advantage of Dolby Cinema’s capabilities.”

The release of I Am Not Madame Bovary in Dolby Vision and Dolby Atmos in China marks a significant step forward in the collaboration between Dolby and Sparkle Roll. In July 2016, the first Dolby Cinema in Beijing was opened at Jackie Chan Cinema’s Beijing Wukesong site. Following that, Sparkle Roll announced a plan to open 10 additional Dolby Cinema sites in China within the next two years.

Dolby Cinema features the Dolby Vision laser projection system, which uses state-of-the-art optics and image processing to deliver high dynamic range with enhanced color technology and a contrast ratio that far exceeds that of any other image technology on the market today. The result is a richer, more detailed viewing experience that delivers strikingly vivid and realistic images and makes viewers feel like they are in the movie’s world.

Dolby Cinema also includes Dolby Atmos sound technology, which moves audio around the theatre, even overhead, with amazing richness and depth. The combination of Dolby technologies with the design and comfort of the Dolby Cinema makes audiences feel closer to the onscreen action.

I Am Not Madame Bovary is co-presented by Beijing Sparkle Roll Media Corporation, Huayi Brothers Media Corporation, Beijing Skywheel Entertainment Co. Ltd., Huayi Brothers Pictures Ltd., and Zhejiang Dongyang Mayla Media Co. Ltd. The movie is based on a novel of the same name by Liu Zhenyun. It is directed by Feng Xiaogang, starring Fan Bingbing. The movie is scheduled to be released in China and the U.S. on November 18, 2016.