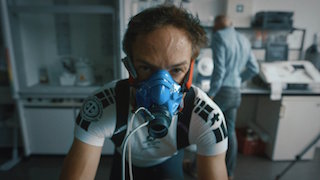 AFI Docs, the American Film Institute's annual documentary celebration in the nation's capital, has announced the Opening and Closing Night films for its 15th annual edition. The festival will open with the East Coast premiere of Netflix's Icarus, directed by Bryan Fogel, and will close with ESPN Films' Year of the Scab, directed by Emmy winner John Dorsey. Both screenings will be held at the Newseum, the festival's Official Gala Screening Partner. AFI Docs runs June 14-18 in Washington, DC, and Silver Spring, Maryland.

AFI Docs is proud to announce the return of AT&T as Presenting Sponsor. AT&T's continued support enables AFI Docs to connect audiences, policymakers and storytellers in the heart of our national government.

"We are thrilled to have two extraordinary films, Icarus and Year of the Scab, open and close AFI Docs 2017," said Michael Lumpkin, Director, AFI Docs. "Filmmakers Bryan Fogel and John Dorsey tell two very different David-and-Goliath tales. Remarkable — even unthinkable — stories like these are what make documentaries such compelling cinema. We look forward to celebrating these films with AFI Docs audiences."

The Opening Night screening of Icarus will be held on June 14 at the Newseum and will feature a Q&A with director Fogel after the film. In Icarus, he sets out to uncover the truth about doping in sports. His journey to outsmart performance-enhancing drug tests transforms into a real-life thriller involving the biggest scandal in sports history — the cover-up of doping activities among Russian Olympians. Icarus is Fogel's first documentary feature.

The Closing Night screening of Year of the Scab will be held on June 18 at the Newseum and will feature a Q&A with director Dorsey. His film chronicles the 1987 NFL strike and the Washington Redskins' team of substitute players who overcame tremendous odds in order to defeat the best teams in the NFL. The perseverance of these players ultimately led the Washington Redskins to victory and helped end the strike.

Tickets to AFI Docs, including Opening Night and Closing Night screenings, will be available early to AFI members exclusively beginning May 11, and to the public on May 15.

Passes for AFI Docs 2017 are now on sale at AFI.com/afidocs. More information about AFI Docs screenings and other special events will be announced in the coming weeks.