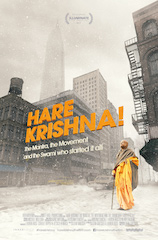 Hare Krishna! The Mantra, The Movement and the Swami Who Started It All is a documentary film on the life of Srila Prabhupada—the 70-year-old Indian Swami who arrived in America without support or money in the turbulent 1960s and ignited a worldwide spiritual phenomenon with only his unflinching determination and faith. The film posted at AlphaDogs in Burbank. As with most historical documentaries, the biggest hurdle the team had to overcome were the technical challenges inherent in working with multiple source formats.

The film includes never-before-seen archival verité footage, Prabhupada’s own recorded words, and interviews with his early followers. Director John Griesser takes audiences behind-the-scenes of a cultural movement born in the artistic and intellectual scene of New York’s Bowery, the hippie mecca of Haight Ashbury, and the Beatle mania of London.

One of the most misunderstood religious groups in the world would likely be the International Society for Krishna Consciousness, often referred to as Hare Krishnas. For many people they conjure up images of robed men with shaven heads trying to sell flowers at the airport for a small donation.

While this type of encounter did in fact happen, what the average person fails to realize is that the Hare Krishna movement has had a positive and healing impact on many people’s lives.

Having filmed and recorded Prabhupada since 1971 and amassed a vast collection of materials from a variety of sources, Griesser was inspired to make the film after finally getting the financing and pulling a team together to make a feature length documentary. 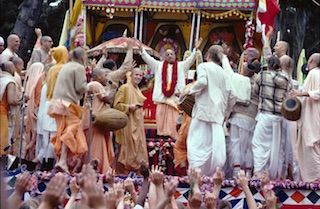 “This project has been a long term desire ever since Prabhupada gave me the go-ahead back in 1974 to make a film on his life,” said Griesser. “Many know of the Hare Krishna Movement, but few know of the founder. His message of love, hope and lasting peace is timeless, but especially in these tumultuous times.”

AlphaDogs became the post house of choice after being highly recommended by a fellow filmmaker.

As with most historical documentaries, the biggest hurdle the team had to overcome were the technical challenges inherent in working with multiple source formats. Colorist Sean Stack worked with Griesser to not only overcome these challenges, but also bring out the vision for the story by making the picture look its absolute best.

Due to the complexity of the project’s workflow, Stack’s tools of choice included a combination of Adobe’s Premiere Pro, Blackmagic Design’s Resolve and Avid’s Symphony to creatively deal with the technical issues within the movie. Stack applied a custom overlay created by AlphaDogs vice president of design Sean Williams that added grain, film glow, light leaks, scratches and dust to give more of a vintage and distressed look to portions of the project. Additional cleanup on old archival footage was completed in After Effects, as were several animations of album art and newspaper clippings. 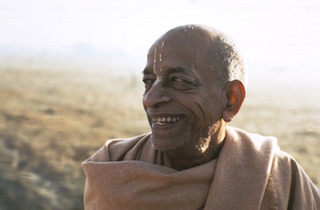 “I look forward to hearing about the success of the project,” said Stack. “It’s a very thorough and thoughtful edit, telling the story of the swami who brought the Hare Krishna faith to the United States and more.”

Audio engineer Curtis Fritsch restored archival audio from the original source material. By using a combination of Waves, Izotope and CEDAR plugins, Fritsch was able to remove unwanted sounds such as ticking clocks and construction work to give utmost clarity to the film’s audio.

Music also played just as much of a role as the dialogue creating moments within the score that needed to be a prominent part of the story. “We had songs by George Harrison, Boy George, and other well known artists,” said Fritsch. “The score was really well done, so I wanted to make sure these popular songs didn’t take away from the composer’s work.”

“I was very pleased with the work the AlphaDogs team did,” said Griesser. “They were friendly, very accommodating and ready to go to the limit to fix the problems we did have. Their level of service and technical aptitude contributed in making the final product look and sound great.”

Griesser hopes audiences will walk away with a better understanding of Prabhupada, his amazing life’s journey, and the ancient philosophy he brought to the West.

Hare Krishna recently premiered in New York City and is a recipient of the Grand Jury Award at the 2017 Illuminate Film Festival. For more information and additional screening dates both domestic and international visit: www.harekrishnathefilm.com