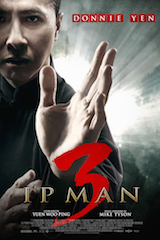 IP Man 3 will be released in China in 4DX on March 4. The film is highly anticipated there because it stars Donnie Yen and Mike Tyson. 4DX fans are looking forward to being immersed in the action battles between the two men. According to CJ 4DPlex, Chinese audiences love local action franchise movies that are screened with its 4DX technology, which features motion seats and environmental effects.

Crouching Tiger, Hidden Dragon: Sword of Destiny was released in 4DX in China on February 19. For that movie, the 4DX theater at Bona Cinemas Xiamen, the first 4DX site in the district, recorded almost 60 percent occupancy rate during the opening weekend.

As of February, 4DX operates 51 4DX auditoriums in China, through deals with the leading multiplex operators in the country, the largest market in the world. These theaters occupy 23 percent of the 4DX market. 4DX plans to continue its sustained growth in the Chinese market, adding 65 more 4DX theaters in 2016