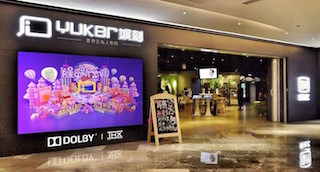 According to the company, Yuke movie theatres combine the convenience of on-demand service with the high quality audio-visual environment of traditional cinemas. Users are free to select the time and location of viewing, as well as content from iQiyi's online movie library.

"The development of on-demand movie theatres poses an exciting opportunity to increase the strength and overall scale of China's film industry," said Yang Xianghua, iQiyi's senior vice president. "iQiyi will take advantage of our strong brand awareness, massive user base, popular content and advanced technology to contribute to the growth of this booming market and extend our premium viewing experience to offline consumers."

As a leading online entertainment platform in China, iQiyi has been active in acquiring a large amount of high-quality movie content from around the world and now boasts China's largest online movie content library. In terms of viewing experience, Yuke is equipped with top-quality technology and facilities. Customers at the Yuke Zhongshan theatre will enjoy acoustics featuring Dolby audio. The theatre is also equipped with high-quality facilities from the world-class brands following THX certification by Lucasfilm, a globally recognized assurance of uncompromising quality, consistency and performance.

During the three-month period ending December 31, 2017, the number of average monthly active iQiyi mobile users reached 421.3 million, and average monthly PC users reached 424.1 million. At the end of March 2018, iQiyi had 61.3 million paid subscribers. In the future, iQiyi's online and offline membership systems will synchronize user benefits across both platforms, providing more conveniences for both online and offline users.

China is one of the largest film production countries in the world generating nearly a thousand films each year. In 2017, a total of 970 films were produced, yet only 487 of them were played in theatres. As the national income level continues to rise, consumer demand for cinema viewing is rising sharply. Booming film production capacity and audience demand have created tremendous value and development potential for the cinema industry. Meanwhile the government is also encouraging the development of China's movie industry and supporting the application of innovative measures to push forward its progress.