IT Chapter Two Gets Immersive Release 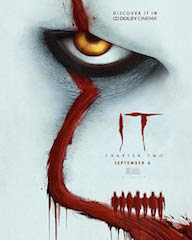 Warner Bros. Pictures, announced today the release of New Line Cinema’s IT Chapter Two in three immersive cinema technologies: the multi-sensory 4DX format, the heightened 4DX Extreme (available in select theaters and territories) and the panoramic, 270-degree ScreenX. When the film is released globally on September 6 audiences worldwide will be able to take in the highly anticipated horror franchise finale in the auditoriums of 4DX and ScreenX.

IT Chapter Two in 4DX will bring another chilling layer of suspense to the tense atmosphere of Derry with a combination of motion, vibration and environmental effects. And, for those who dare, IT Chapter Two in 4DX Extreme will be made even more terrifying. Amping the levels of motion, vibration and environmental effects by up to 20 percent, 4DX Extreme will have audiences jolting and gripping the edge of their seats, taking in the intensely suspenseful atmosphere of the 4DX auditorium in 4DX Extreme.

Finally, IT Chapter Two in ScreenX will expand the world of Derry, with key sequences throughout the film projected onto the left and right-side walls of the auditorium, surrounding the audience and enhance the looming, atmospheric tones of the film inside the theater. As the screen stretches onto the ScreenX wings, suspenseful images will dance in the peripherals of the audience, drawing the audience deeper into the experience.

“We have had a longstanding partnership with Warner Bros. Pictures, and we are thrilled to be releasing our sixth collaboration this year with IT Chapter Two in 4DX, 4DX Extreme and ScreenX,” said CJ 4DPlex CEO JongRyul Kim. “Each collaboration has been wonderful, and we look forward to having audiences gripping onto their seats as they watch the heightened and terrifying concluding chapter of ‘IT’ for a one-of-a-kind in-theater experience.”

“We are incredibly excited to be expanding our partnership with CJ 4DPlex to release IT Chapter Two in 4DX, 4DX Extreme and in ScreenX,” said Thomas Molter, head of international distribution at Warner Bros. Pictures. “We trust CJ 4DPlex to add something new and exciting to the film-going experience, and this film, enhanced by these cutting-edge formats, is going to be a lot of fun and especially terrifying for our audiences.”

This partnership follows past successful collaborations between CJ 4DPlex and Warner Bros. Pictures that include: Annabelle Comes Home, The Curse of La Llorona, Godzilla: King of the Monsters, Pokemon Detective Pikachu and Shazam! in both 4DX and ScreenX formats.