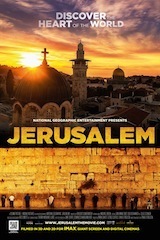 Jerusalem, a new film that explores on a grand scale the intersection of science, history and religion in this ancient, enigmatic place, will premiere in giant-screen, IMAX and digital 3D cinemas in the USA and worldwide beginning September 20. Cosmic Picture and Arcane Pictures produced the film, which is being distributed by National Geographic Entertainment.

Narrated by Benedict Cumberbatch (Star Trek into the Darkness, PBS’s Sherlock), Jerusalem gives audiences a rare glimpse of the storied city, as well as exclusive access to iconic holy sites—including the Western Wall, the Dome of the Rock, the Church of the Holy Sepulchre, the Jordan River, the Sea of Galilee, and the mountain fortress of Masada—and to little-known parts of the region. The 43-minute large format film was executive produced by the late Jake Eberts, legendary producer of movies such as Gandhi, Chariots of Fire, and Dances with Wolves; produced by Taran Davies, George Duffield and Daniel Ferguson; and written and directed by Daniel Ferguson. Large format industry veteran Reed Smoot, ASC, is Director of Photography.

Special access is one of the unique aspects of the film. Filmmakers were granted permission to capture aerial images over the Old City of Jerusalem, and throughout the Holy Land. A strict no-fly zone has existed over the region for many years, restricting low-altitude filming. Once secured, the filmmakers launched a major campaign in both Hebrew and Arabic to notify the public weeks before filming began.

“Jerusalem embodies National Geographic’s commitment to tell visually compelling stories that foster greater understanding and appreciation of world cultures, history, science and geography,” said Lisa Truitt, president of National Geographic Entertainment. “With this extraordinary film’s immersive experience, audiences will feel as if they are really walking the streets of this beloved and iconic place.”

"Through the unrivaled beauty, visceral nature and incredible technology of giant screen cameras, we were able to compose the images and move the camera in a way that makes you feel as if you are experiencing Jerusalem first-hand," said Daniel Ferguson, writer/director. "We were thrilled with the opportunity to provide audiences with the story of the Old City on this grand scale, and offer unique perspectives, aerials and access to this part of the world in a way you could never get in any other format."

Jerusalem presents the story from many perspectives—interviewing a prominent archaeologist and following real-life inhabitants of the ancient city to explore the enduring appeal of this unique crossroads of civilization.

With thousands of archaeological sites, Jerusalem is one of the most excavated cities on the planet, with so much more waiting to be discovered. Since 2010, the Jerusalem production team has followed several of the most impressive excavations in and around Jerusalem, documenting their progress as well as the tools used to uncover and understand the past. The film features renowned archaeologist and religious studies professor Dr. Jodi Magness of the University of North Carolina at Chapel Hill, who explains the many layers that chronicle this important crossroads of civilizations. In the film, Dr. Magness leads a group of students through an ancient water tunnel beneath the biblical-era city of Jerusalem, which conveyed water from the Gihon Spring outside the city walls to the residents of the city in the event of a siege by an invading army. She also gives audiences a tour of excavations around the Western Wall, marveling at one of the greatest feats of engineering in the ancient world.

Audiences will also meet three teenagers who call Jerusalem home—Farah Ammouri, Revital Zacharie, and Nadia Tadros—from each of the three major world religions that share the Old City. From the Damascus Gate and the Dome of the Rock, to the Western Wall and the Church of the Holy Sepulchre, the girls each reveal the Holy City from their own perspective. For those of the Jewish faith, Jerusalem represents their homeland. Every synagogue in the world faces Jerusalem, and three times a day, Jews pray towards the temples that once stood here above “the Kotel” or Western Wall. They believe prayers pass through the Kotel to God. For Christians, Jerusalem is the place where Jesus was arrested and sentenced to death nearby in the Garden of Gethsemane. The Via Dolorosa, or “Way of Sorrows,” is said to be the path Jesus took on his way to crucifixion. For Muslims, Jerusalem is the city of the prophets. Muslims believe that Mohammed was taken on a miraculous journey from Mecca to Jerusalem where he ascended to Heaven on a ladder of light, which they associate with the Dome of the Rock.