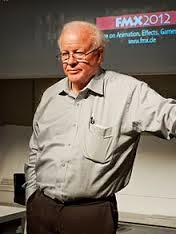 JMR Electronics recently designed and built a high performance server and storage system for the production of the world’s first high-frame-rate 3D movie. UFOTOG, a 10-minute short that tells the story of a man’s attempt to photograph alien spacecraft, is the work of director, visual effects pioneer and filmmaking visionary Douglas Trumbull. In a cinematic first, Trumbull shot the film in stereoscopic 3D at 4K resolution and at a camera speed of 120 frames per second. JMR’s unique server and storage solution was used on the set to collect, manage, playback and edit the huge amounts of image data produced during the making of the film.

UFOTOG is more than a demonstration of high-frame-rate imagery; it embodies Trumbull’s concept for a new form of cinematic entertainment. Known for his work on such films as 2001: A Space Odyssey, Close Encounters of the Third Kind and Blade Runner, Trumbull believes that films shot at ultra-high resolution and frame rates (and supported by equally rich soundtracks) will deliver a kind of immersive experience that will draw more people to movie theaters.

“Profoundly increasing the frame rate, results in a tremendous increase in vividness and saturation, and an extremely lifelike illusion,” Trumbull said. “What you see on the screen is less like a movie and more like a live event.”

The production of the type of films that Trumbull envisions will entail significant changes to current production workflows, in part to manage the volume of data produced by high-resolution cameras shooting at ultra-high frame rates. UFOTOG was shot with Canon C500 cameras (paired in a 3ality 3D camera rig), recording RAW data at 120 fps. Actors and other live elements were primarily shot on a green screen stage (at Trumbull’s studio) and composited into 3D virtual sets.

In order to make this work, Trumbull and his production team needed the ability to perform real-time playback of the 120 fps, 4K, 3D camera media, and quickly provide it to compositors. Designing an appropriate workflow for that task proved daunting. 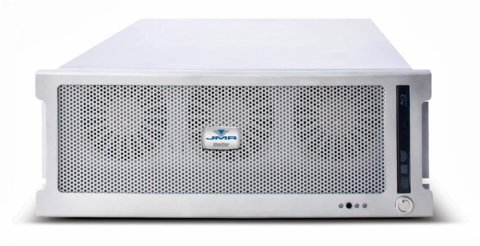 “The amount of data that we would be collecting on set was the key issue,” said Timothy Huber of Theory Consulting, the project’s technology consultant. “Doug needed a playback server that would work at 120 frames per second for both eyes. Virident Systems had a flash storage device with the bandwidth to playback material at that speed, but the motherboards and graphics processors couldn’t handle it. The bottleneck wasn’t the storage infrastructure, it was everything else.”

Huber sought the support of JMR Electronics, which has been designing and building storage solutions for more than 30 years. “They plugged in the Virident cards and found the right combination of motherboard, processor, memory and GPU,” Huber said. “Within two weeks, they got it working.”

“JMR has a long history of pushing the envelope and maximizing the performance of their systems,” Huber said. “They know how to integrate all the pieces. It’s more than knowing the specs for each processor; you have to know how they all work together.”

The JMR capture server was initially brought onto the set and used to facilitate real-time playback and compositing. Later, it was moved to a near-set compositing facility while linked to the set via an InfiniBand 56 GB connection. JMR provided round-the-clock tech support.

“The system kept chugging away despite all the footage that was thrown at it and some very long work cycles,” said JMR Electronics technical products specialist Miguel A. Saldate. “It speaks to the quality of our engineering, the way we build our boxes, the materials we choose, the way we design air flow, the power provisioning, the component and software selection.”

Based on their experience with UFOTOG, Trumbull and Huber have begun drawing up workflows for future high-frame-rate productions that include a similar flash storage capture server as its data hub. “Once data is captured by the camera, it has to be downloaded into a storage medium and then made available to compositors, editors and post production people to manipulate and manage,” Trumbull said. “That’s where the JMR’s technology comes into play for us. Their products are at the leading edge of workstations that allow artists to work at high bandwidth.”

JMR founder and CEO Josef Rabinovitz said, “We’re pleased to create cutting-edge solutions for visionaries such as Doug Trumbull, and keep actively engaged providing systems for 4K high frame-rate productions.  Similar hardware from JMR is used in high-resolution digital airborne mapping for government agencies, and by technologists around the world.”