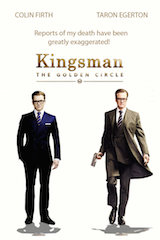 ScreenX, the world’s first multi-projection system that provides a 270-degree panoramic film viewing experience within a theatre setting, has announced that Twentieth Century Fox’s Kingsman: The Golden Circle will be available in the immersive format. In addition to opening in ScreenX, the film will be made available for bookings on nearly 400 4DX screens in 49 countries around the world.

Kingsman, the second film in the franchise, is the first Twentieth Century Fox film to be converted into the format, and will be available at a total of 119 pre-existing ScreenX locations throughout the world, including Korea, China, Thailand, Turkey, Indonesia and the United States.

“ScreenX is a visually beautiful and immersive format that transcends the traditional cinema and movie theatre experience. We’re looking forward to the second installment of the Kingsman franchise to debut in the 270-degree viewing format, and anticipate our fans around the globe to be astonished and immersed in the best way possible,” said Andrew Cripps, president of international distribution, Twentieth Century Fox.

“As we grow our presence and footprint here in the States, we’re excited to continue to work with top studios like Twentieth Century Fox to really produce and provide quality content for film viewers around the world. We’re confident that the beautifully shot Kingsman: The Golden Circle will wow fans as they witness the film spanning three walls inside a ScreenX auditorium, or enjoy the action and unique experience provided by 4DX,” said Byung-Hwan Choi, CEO, CJ 4DPlex.