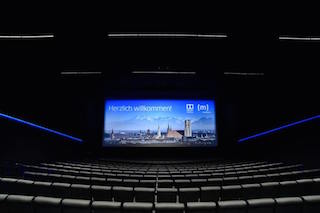 Kinopolis Gruppe today announced that it has opened Germany’s first Dolby Cinema at the renowned Mathäser Palast in Munich. In addition, the Dolby Cinema at Mathäser will have its own entrance as well as a lounge area for film fans to enjoy the refreshments and beverages that will be on offer in a VIP style lounge.

Kinopolis spokesman Dr. Gregory Theile said, “We are absolutely thrilled to be the first to offer Dolby Cinema in Germany. The innovative design, the impressive sound, and the absolutely stunning picture take the movie experience to a whole new level. We are always striving for the best and most innovative cinematic experience for our guests and that’s why we chose the Dolby Cinema concept for our flagship site in Munich.”

“We know that there has been a lot of excitement for the opening of the first Dolby Cinema in Germany at this site with Kinopolis. We’re excited to now be able to offer film fans in Munich an unrivalled cinematic experience in the heart of the city,” said Doug Darrow, senior vice president of cinema business group, Dolby Laboratories. “This opening is another step in the expansion of the Dolby Cinema footprint in Europe, offering consumers more locations and the ability to enjoy the best sound, picture, and environment for any genre of movie.”

Dolby works with each cinema location to create the most perfect Dolby Cinema environment possible. The technology is combined with ultimate luxury throughout the cinema including 312 seats and 15 recliners in the first row at the Mathäser site.

Dolby Cinema combines Dolby Vision, Dolby Atmos, and custom design to create an environment where patrons can be fully immersed in the storytelling of a film. Dolby Vision is presented through a dual 4K laser, high dynamic range projector system, and boasts a spectacular, ultra vivid picture. Compared to standard screens, the Dolby Vision image is twice as bright, 500 times the contrast ratio, has blacker blacks, and an unsurpassed color palette. Dolby Atmos sound transports viewers into the scene, filling the cinema with a soundscape that flows all around and above the audience.