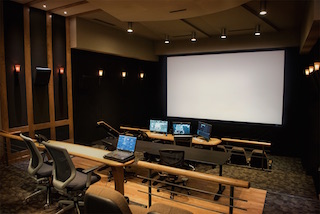 “Opening Light Iron Atlanta is central to Panavision’s commitment to provide end-to-end services for our customers,” said Kim Snyder, president and CEO of Panavision. “We are excited to amplify our post resources in the thriving Atlanta market.”

Peter Cioni, Light Iron’s chief financial officer said, “Light Iron has been supporting Georgia productions for years through our mobile dailies services. Now with a team on the ground, productions can take advantage of our facility-based dailies with talent that bring the finishing perspective into the process.” The company’s Atlanta staff recently provided dailies services to season one of Kevin (Probably) Saves the World, season three of Greenleaf, and the features Uncle Drew and Superfly.

With a professionally calibrated theater, the Light Iron Atlanta facility has hosted virtual digital intermediate sessions from its LA facility for cinematographers working in Atlanta. The theater is also available for projecting camera and lens tests, as well as private screenings for up to 45 guests.

Cioni noted that director of business development Clark Cofer, a well-respected member of Atlanta’s production and post industry, leads the new location. “Clark brings years of local and state-wide relationships to Light Iron, and we are pleased to have him on our growing team,” Cioni said.

Cofer most recently represented Crawford Media Services, where he drove sales for their renowned content services to companies like Lionsgate, Fox, and Marvel. He currently serves as co-president of the Georgia Production Partnership, and is on the board of directors for DeKalb County Film and Entertainment Advisory Board.

On joining Light Iron, Cofer said, “The partnership of Panavision and Light Iron is one that cinematographers, producers, and studios can all appreciate. I’m excited to see its impact on the Atlanta production community.”

Light Iron is planning a reception next week to celebrate its Atlanta opening.